As the countdown ticks closer to August 19 –the official release date of Samsung Galaxy Note 7, everyone is eager to see how it fares against the multi-award winning Samsung Galaxy S7 Edge. Both phones offer stunning designs, premium features, long battery life, huge storage space, and powerful performance. So the differences obviously lie in the smaller details. Here is a comparison of arguably two of the best high-end smartphones from Samsung – – Galaxy Note 7 vs Galaxy S7 Edge.

Note 7 generally follows the design cues of S7 Edge, but it has a slightly squarer appearance. Let us now compare the build, weight, as well as size of these two smartphones.

Note 7 comes equipped with an improved version of its trademark S-pen stylus. S7 Edge does not have a stylus and is entirely finger operated. The new stylus of Note 7 contains a fine tip and is waterproof as well. Due to the increased pressure sensitivity of the upgraded stylus, writing onscreen notes have become quicker and more efficient. With the new software upgrades, features like shortcuts for making GIFs, magnification, and translation are available. The holder of the stylus is also given a new upgrade, preventing the stylus from getting stuck when putting it upside down. 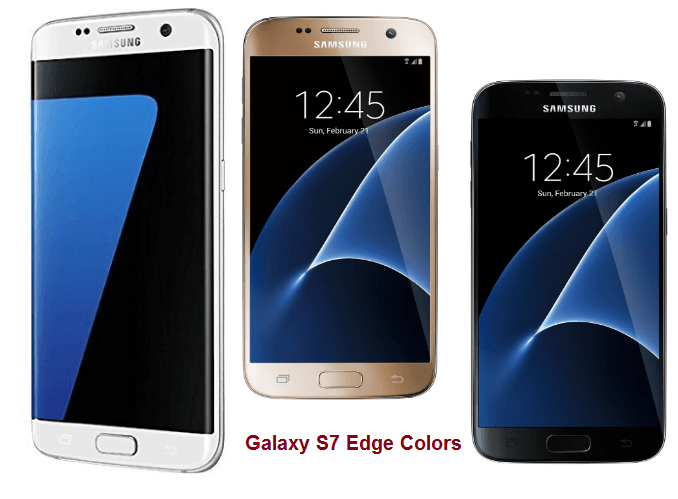 The color schemes of both Note 7, as well as S7 Edge,  are in-line color schemes. Note 7 has a Blue variant in color in addition to the Silver, Black, and Gold colors of S7 Edge.

Unlike Apple’s 3D touch, there is no shortcut enabled depending on the pressure exerted on the display screen for both the phones. Overall, the display of both Note 7, as well as S7 Edge, have lots of similarities and a few differences.

The screen size of Note 7 retains the size of 5.7 inches like its predecessors. The size of S7 Edge is 5.5 inches with a duel edge display. This results in a lower pixel density in Note 7 (518ppi) when compared to S7 Edge (534ppi).

Both Note 7, as well as S7 Edge, uses the super AMOLED (or Active Matrix OLED) technology. The faster pixel switching response time of AMOLED displays helps in circumventing the issue of ghosting.

Both Note 7, as well as S7 Edge, has Quad HD resolution.

Both phones have a curved display. However, the curves of Note 7 begins closer to the edge for quicker maneuvering of the stylus. There is also a dim, always-on display available for both phones. This always-on display shows notifications like time and number of new messages.

Mobile HDR has been added to the display attributes of Note 7. This means that whenever Mobile HDR contents are available, Note 7 would be able to show it. This capability is not present in S7 Edge.

The specifications and technical aspects of Note 7 and S7 Edge are compared here.

Both Note 7, as well as S7 Edge have a 2.15GHz + 1.6GHz 64 bit quad-core Qualcomm Snapdragon 820 processor (or Exynos, depending on region). Both devices have a RAM speed of 4 GB. The mobile software of Note 7 is Android 6.0.1 Marshmallow, while that of S7 Edge is Android 6.0 Marshmallow. An upgrade to Android 7.0 Nougat is expected soon for both devices.

Both Note 7, as well as S7 Edge, have a Rear camera of 12 Megapixels and a Front camera of 5 Megapixels. Although the previous versions of both Note as well as Edge
had 16 Megapixel cameras, the decrease in 4 Megapixels in the new versions is offset by better-quality low-light photography. While taking selfies in low light, the screen lights up and acts a flash. Videos are recorded at 4k resolution for both phones.

Both Note 7, as well as S7 Edge, are fitted with a new f/1.7 lens. This creates larger aperture and helps to produce good quality images in low-light photography.

Both Note 7, as well as S7 Edge, have OIS, which helps in creating sharp images even when doing handheld shooting using the phones. The blurring and shaking of the camera are reduced drastically with the aid of Optical Image Stabilization.

Double tapping the home button launches the camera of both Note 7, as well as S7 Edge.

Batteries of both Note 7, as well as S7 Edge, are hefty and have a long life, although they are not removable.

The battery capacity of Note 7 is 3,500mAh, while that of S7 Edge is 3,600mAh. While the overall capacity seems negligible, the battery of Note 7 discharged two hours earlier than S7 Edge when the looping video drain test was performed.

Both Note 7, as well as S7 Edge, can be charged wirelessly. Both can also be charged quickly using stock cables.

There are several special features available.

Both Note 7, as well as S7 Edge, are compatible with VR headsets from Gear. The Note 7 uses USB-C connector while S7 Edge uses micro USB connector.

Both Note 7, as well as S7 Edge, has the biometrics-driven fingerprint sensor technology linked to the Home button.

The new technology of Iris Scanner is unique to Note 7. It uses infrared sensors from IR LED and a special iris camera for detecting patterns in the iris of registered user. Simply pointing it at the user’s eyes unlocks the phone.

There is no clear winner in the battle between Galaxy Note 7 vs Galaxy S7 Edge. Galaxy Note 7 is a stylus slinging phablet smartphone which would impress anyone. It is especially well matched for people who love to write with their handwriting instead of typing on screen – like artists or architects. As for those who are mindful of budget and not a big fan of Stylus, it is best to stick with S7 Edge.