Kaleo Pharma Could Possibly Be Big Competitor for Mylan 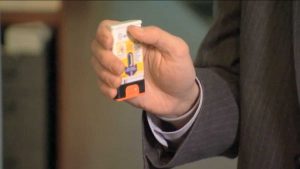 You may recall that EpiPen maker Mylan recently raised the price of the allergy intervention to astronomical proportions but it looks like, perhaps, they may have just been trying to get ahead of the competition. Mylan also announced the release of a generic version which may soon also have competition across the industry.

Kaleo Pharma announced, on Wednesday, plants to reintroduce its own auto-injector device—known as the Auvi-Q—within the first six months of next year. The product was originally recalled in 2015 over questions regarding its dosage delivery. Now, Kaleo has reformulated and taken manufacturing back from Sanofi.

It has only been two months, now, since Mylan administered the major price hike, so this is an opportune time for Kaleo.

“We believe that patients should have options when it comes to epinephrine auto-injectors for life-threatening allergic reactions,” said Spencer Williamson, who is president and CEO of the privately-held Kaleo. “When a health-care practitioner prescribes Auvi-Q, determining that is best for a patient, we believe that the patient should be able to obtain the product without insurance barriers or being subject to high out-of-pocket costs.”

However, it is not yet clear if the Kaleo devices will be any less expensive than its proprietary competitor. Of course, Williamson insists they are working hard to make the intervention more affordable.

He goes on to say, “We understand that price is central to this conversation. We believe that patients should be able to obtain the product without insurance barriers or high out-of-pocket costs. That’s our focus.”

On the other hand, members of Congress continue to scrutinize Mylan’s pricing model and modeling practices, so they are a little more welcoming to Kaleo’s entry into this field. Accordingly, ranking Democrat on the House Committee on Oversight and Government Reform, Elijah E. Cummings, of Maryland, comments, “Increased competition is certainly good news, but we need much greater transparency over the massive profits these companies are making in order to ensure that the American people have affordable access to these lifesaving drugs.”