With J&J Exit, Actelion Now In Talks With Sanofi 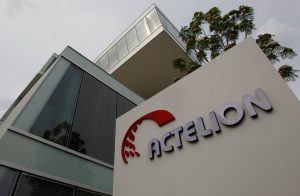 Swiss biotech firm Actelion Pharmaceuticals Ltd could be absorbed by French drug giant Sanofi SA in a bid that could be valued at roughly $30 billion USD. While it is not quite clear just how much Sanofi is willing to pay, what is certain is that when Johnson & Johnson ended its discussions with Actelion, Sanofi was able to swoop in.

Basically, Actelion had an offer on the table but J&J said it was not able to reach an agreement that would yield adequate value for all shareholders. At the same time, Actelion expressed confidence in its ability to attract an offer that would be significantly higher than what the US company had offered, a company that is currently worth about 250 Swiss francs per share.

Price was not the only factor, however, as a person close to the deal said that the two could not agree on a structure, either.
Indeed, though, Actelion closed at 208.50 Swiss francs on Tuesday, which is actually a premium of 25 percent over their share price before J&J’s bid became public just two weeks ago. This put Actelion’s market capitalization at 22.5 billion Swiss francs (approximately $22.2 billion).
With that, fund manager Eleanor Taylor Jolidon of Union Bancaire Privee (Geneva)–one of Actelion’s top 40 investors—commented, “I presume these parties are prepared to make offers that are more attractive than that which J&J was envisaging. Otherwise, the board of directors would not have acted in the interests of the stakeholders by creating a situation in which J&J walked away.”
Now, analysts had previously indicated that Sanofi could be a potential buyer, as Actelion’s pulmonary arterial hypertension drug would certainly supplement Sanofi’s Genzyme rare disease unit.

But even knowing that, experts argue that a price war—and subsequent bidding auction—would actually be a detriment to the deal. This could drive the price of a small company up to such unrealistic levels that it would no longer be desirable.
Furthermore, Bernstein analyst Tim Anderson notes, “Winning a bidding war when it comes to acquiring biopharmaceutical companies almost always equates to way over-paying.”

He adds, “These are not bragging rights. If Actelion were to go out at around $30 billion, this equates to around 13 times sales and 30 times earnings before interest and taxes. These are high figures.”

$33.54 Million in Sales Expected for Weave Communications, Inc. This Quarter

$2.77 Billion in Sales Expected for SpartanNash This Quarter