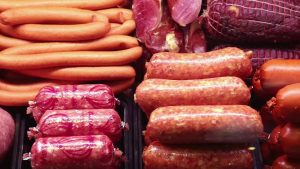 It would come as no surprise to you that a study says that bacon and soda—and processed foods, in general—are bad for your health. But there is a new study that actually recommends eliminating these very things from your diet, completely, as they are strongly linked to stroke, diabetes, and hear disease.

The new research—from Tufts University—claims that eating too many of these “bad” foods (and eating them too often) and not enough “good” foods has contributed to nearly half of all deaths caused by heart disease, diabetes, and stroke.

Looking at the data more closely, 2012 US government data observed roughly 700,000 deaths (due to diabetes, heart disease, and stroke) and analyzed relevant national health surveys which inquired about the participants eating habits.

The researchers had found that the majority of people (in the survey) did not consume the recommended amounts of nearly a dozen “good” and “bad” foods. The study also pointed out that many of these diets were lacking in seeds, nuts, salmon (and other Omega-3-rich seafood), fresh fruits and vegetables, and whole grains. The researchers said that many people replaced these healthy foods with processed meats (bacon and hot dogs), sugary drinks, and excess salt.
Published in the Journal of the American Medical Association (JAMA), the study claimed that this unfavorable ratio of “good” to “bad” foods has likely contributed to at least 45 percent of heart disease, stroke, and diabetes deaths in the United States.

Now, it is important to also note that although the research certainly suggests benefit of completely eliminating all processed meats and sugary drinks, U of M School of Nursing PhD—and Registered Nurse—Melissa Horning advises that you do not have to—and probably should not—just quit altogether.
Horning counsels: “Assess how much bacon you’re eating. If you’re eating bacon every single day, think about what you could do to decrease that right. Maybe it’s not going cold turkey on the bacon.”

Yes, she agrees that the study shows that bacon is “unhealthy” but giving up on it completely (or anything else, really) is a little counterproductive.
She goes on to say, “If you decide tomorrow that you’re going to do all of the things that this study recommended, you’re going to find that you’re really exhausted. That it’s really overwhelming and the reality is, it’s not going to be as sustainable.”

Instead of denying yourself the pleasure of these tasty, but ultimately unhealthy, foods, she says that you should simply try to incorporate more of the healthy stuff. Basically, eat more fruits and vegetables throughout the day, particularly in place of salty and sugary snacks. Nuts also make a good snack and have healthy fat.