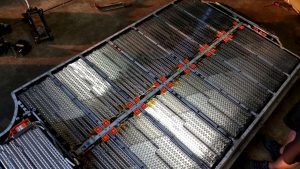 Tesla has lowered the price of its vehicles with the most significant price reduction being that of the Model S 75. The price of the Model S 75 has been reduced by $5,000 and will now retail at $69,500 which is only $1,500 more expensive than the Model S 60 which has been discontinued. Another model that will be offered at a lower price is the Model S 90D which is now $2,000 cheaper.

Besides the reduction in price, other changes that have come to the base version of the Model S include the addition of an all-glass roof as standard. As an add-on, the roof used to cost $1,500. The base model also now has a rear power liftgate that is automatic.

While the generous drop in price may make those who had ordered the now-discontinued Model S 60 feel like they were shortchanged, battery upgrade prices have also come down. To upgrade to a 75 kWh battery from the 60 kWh battery will now only cost $2,000. Previously, the cost of such an upgrade was $7,000 (which was also a drop from $9,000).

Not all models will get a price drop though. On the contrary, high-end models such as the Model S 100D will now retail at higher prices as it will now cost $97,500 up from $95,000. As for the Model X P100D, it will now cost $135,500 up from $145,000. While the price decreases will be effective immediately, the price increases will take effect beginning April 24 so as to accommodate customers who had already placed their orders.

The move to tweak prices is being seen as a strategy to avoid or at least reduce the cannibalization effect the Model 3 which will be launched in July is likely to have on the sales of the Model S. Reduced prices are, however, not expected to negatively affect the profit margins of the electric car maker.

“We expect our total average selling price to remain almost exactly the same,” said Tesla in a press statement.

Cardinal Health Price Target Increased to $67.00 by Analysts at Barclays