Under Armour Struggling, But Holding Strong 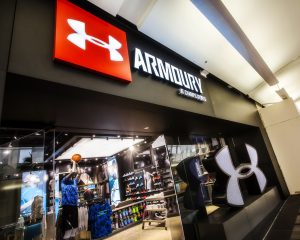 For a second there, it looked like things were going to start going badly for Under Armour Inc but investors found relief Thursday morning when the company posted that the loss they experienced was not as bad as the loss they had originally expected. That’s not to say, of course, that the company did not, in fact, experience a loss; only that the outlook is better than they had anticipated.

Overall, the athletic wear retailer posted a 12 percent increase in accessories sales for the first quarter on the back of men’s training and running, and youth and global football apparel. Speaking of apparel, that sector rose 7 percent in strength and training and in golf and team sports; footwear grew just 2 percent.

While that might seem like good numbers, the same period last year saw footwear sales up 64 percent, mostly in basketball shoes.

Still, Jefferies research analyst Randal Konik comments, “UAA is one of the few brands that matter in the athletic space,” noting that the company has quite the opportunity to scale its North American segments even further, particularly in the women’s wear and footwear departments.

He goes on to saay, “We believe this brand is here to stay,” noting how profit margins came in “better than feared” for the first quarter. He notes, quickly, that Under Armour’s inventories continue to be “in good shape.” This “better than feared” guidance comes from posting a 1st quarter loss of 1 cent per share versus the 4-cent deficit they had anticipated.

Now, last quarter, Under Armour had lowered its guidance for 2017, pulling operating income estimates down to $320 million. The company now says that it anticipates a smaller gross margin on the year and holds strong on these estimates. Under Armour also continues to anticipate net revenue to grow between 11 and 12 percent to reach nearly $5.4 billion by the end of this year.

The athletic wear retailer has suffered, lately, from increased competition, which has slowed growth in North America. Nike and Adidas—iconic, historic brands—continue to put pressure on newcomer Under Armour to occupy as much of the athletic apparel retail space as possible.
At close of day on Wednesday, Class A shares of Under Armour were down about 56 percent year over year; they have fallen 32 percent for the period year-to-date.

HTMLCOIN Trading Down 18% Over Last 7 Days