US Home Builder Confidence Up, But We Aren’t Out of the Water Yet 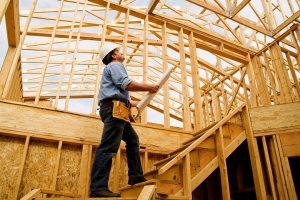 On Monday, Wells Fargo bank and the National Association of Home Builders both said their index for builder confidence on newly-built, single-family units more than doubled. From 68 points in April, the index increased by 70 points, to reach its strongest levels since the housing market bust roughly ten years ago.

The housing supply remains tight and, as such, US homebuilders now expect stronger sales to come, though this is not a metric you can simply gather from mortgage applications alone.

Accordingly to NAHB Chairman Granger MacDonald, who is a homebuilder and developer from Kerrville, TX, “This report shows that builders’ optimism in the housing market is solidifying, even as they deal with higher building material costs and shortages of lots and labor.”
Their index has three components, and the sales expectations component saw the biggest gain over the next six months. It rose 4 points to 79, the highest such increase since June of 2005. Another component grew—current sales conditions—rising 2 points to 76. The buyer traffic component, however, fell 1 point to 51.

Analysts warn, however, that even though homeowner sentiment is on the rise, single-family housing starts have not yet seen strong gains. Furthermore, it seems that entry-level, mortgage-dependent homebuyers are not having an easy go right now. For example, mortgage applications for newly-built homes fell 4.3 percent year-over-year in April, says the Mortgage Bankers Association. This is the first annual drop recorded in 2017, as applications plummeted by 20 percent. Still, the MBA index does not account for seasonal adjustments.

And it is important to remember that newly built homes are more expensive, technically, than comparable existing homes. You should also note that builders are not necessarily focused on entry-level product. Although some companies have made more efforts to move to a lower-priced model, most of these new homes have price tags higher than $200,000, approximately the national median price for an existing home.

MBA vice president of research and economics, Lynn Fisher, notes, “A relatively strong March may have pulled forward some applications from April, exacerbating the normal seasonal falloff. On net, year-to-date applications for new homes are running about 3 percent above the same period from 2016. Despite steady demand for housing, homebuilders continue to face rising costs for labor and materials, which will continue to moderate the pace of building.”