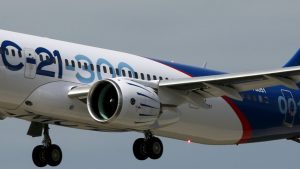 Russia carried out the first post-soviet test of a new passenger jet when the recently unveiled MS-21 plane had its maiden flight on Sunday. The MS-21 300 passenger jet is built by Irkut Corporation whose parent company is United Aircraft Corporation, a state-controlled entity. In its inaugural flight the medium-range passenger jet stayed in the air for about half an hour while flying at a speed of 300 kilometers per hour at an altitude of 1,000 meters.

“The flight mission has been completed. The flight was fine, there were no observations which will prevent further testing,” Oleg Kononenko, a test pilot, said.

Competition to Boeing and Airbus

The maiden flight of the MS-21 300 had not been previously publicized and came three weeks since another passenger jet was tested in China, in what might turn out to be a threat to established plane manufacturers such as Airbus and Boeing.

Officials in Russia have claimed that the MS-21 is much better than similar planes made by other manufacturers in the West and are confident that the passenger jet will be a favorite with carriers both in Russia and outside Russia. Western analysts, however, say that China and Russia have a long way to go before they can effectively take on Boeing and Airbus.

Sources in Western aviation were, however, surprised by the brevity of the MS-21’s test flight as well as with the low altitude it flew at. This is because debut test flights of European and North American models normally last for between three and four hours. Some sources suggested that the reason could have been that the test crew either encountered an unexpected problem and decided to land sooner than they had planned or they faced severe limitations from the beginning.

A spokesperson for United Aircraft Corporation said that the time the test flight took had been enough to test all that needed to be tried out in the air.

In the recent past Russia has made a lot of efforts in shaking off a negative reputation of having aircraft that are old and creaky and which are flown by crews who are inexperienced. Last year, Aeroflot, a Russian carrier, was granted a fourth star by Skytrax, an independent ratings website. This firmly placed it in the league of major carriers in the West and the Middle East.