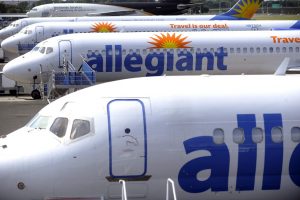 Allegiant Air (NASDAQ:ALGT) is expanding to 28 new routes and three new destinations, according to a statement by the company. Allegiant began with one plane and one route in 1999. Now, the airline operates more than 80 aircraft and serves 300 routes across the United States. Over the years, the carrier has shed underperforming routes and added more promising ones. Allegiant typically offers anywhere from two to four flights a week between most of its city-pairs, with daily service rare.

Flights from the Gulfport-Biloxi International Airport in Mississippi’s Coast will begin Aug. 30. Allegiant will fly non-stop to one destination from Gulfport. Flights from the two other new cities – Milwaukee and Norfolk, Va. – are scheduled to begin in the fall. Allegiant will fly non-stop to five destinations from Milwaukee and three from Norfolk.

Allegiant says the expansion is “the largest-ever announcement of new service in the company’s history.” Allegiant will fly two flights a week on all of the new routes except one; the Cincinnati-Los Angeles schedule. On the Cincinnati-Los Angeles route, the airline will have four flights per week. Introductory one-way fares on the new routes will start at $35 for travel dates through Feb. 13.

Lukas Johnson, Allegiant’s senior vice president of commercial, said, “We’re so excited to grow our network and add service in Gulfport, Norfolk and Milwaukee. With the addition of three new cities and a major expansion of service into Phoenix, we’ll be able to offer some great fall travel options, with convenient, non-stop service across the country.” Allegiant is also converting its fleet exclusively to Airbus A320 and A319 jets.

Allegiant is one of the three big “ultra-low-cost carriers” operating in the United States, along with Frontier and Spirit. These airlines target budget-conscious leisure fliers with low base fares, but charge extra for everything from carry-on bags to water. Once on board, snacks, beverages and souvenirs are available for purchase with a credit card. This allows travelers pay for only the services they want for their trip.