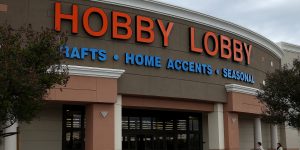 Early in the day on Wednesday, July 5, the United States filed a civil complaint accusing that Christian arts and craft supply store Hobby Lobby of smuggling thousands of ancient artifacts from Iraq. As such, Hobby Lobby has agreed to pay $3 million in fines as well as forfeit thousands of clay bullae, cylinder seals, and cuneiform tablets which had been falsely labeled and shipped to the company from exporters in the United Arab Emirates and Israel.

Clay bullae are, basically, balls of clay imprinted with seals on the surface that are typically used to show the authenticity of a document. Cuneiform is a system of ancient writing involving carving inscriptions into stone or clay, typically tablets.  Cylinder seals were instruments used to roll impressions into clay.

In a statement, the company explains: “The company imprudently relied on dealers and shippers who, in hindsight, did not understand the correct way to document and ship these items.”

Prosecutors, however, said that the company had been warned, by an expert, it was quite likely that such items coming from Iraq were probably looted from archaeological sites. That means these items should require deeper speculation and more verification.  Still, the company bought roughly 5,500 artifacts for approximately $1.6 million, despite the advisement.

According to US attorney Bridget M Rhode, “American collectors and importeres must ensure compliance with laws and regulations that require truthful declarations to US Customs and Border Protection, so that Customs officers are able to scrutinize cultural property crossing our borders and prevent the inappropriate entry of such property.”

In addition, Angel Melendez, the agent in charge of the customs investigation, comments, “While some may put a price on these artifacts, the people of Iraq consider them priceless.”

In defense, Hobby Lobby said: “Developing a collection of historically and religiously important books and artefacts about the Bible is consistent with the Company’s mission and passion for the Bible. The Company was new to the world of acquiring these items, and did not fully appreciate the complexities of the acquisitions process. This resulted in some regrettable mistakes.”

Furthermore, Hobby Lobby president Steve Green also advised that the company never purchased items directly from within the borders of Iraq, but has “learned a great deal” from the investigation.

He adds, “We should have exercised more oversight and carefully questioned how the acquisitions were handled.  Our passion for the Bible continues, and we will do all that we can to support the efforts to conserve items that will help illuminate and enhance our understanding of this great book.”