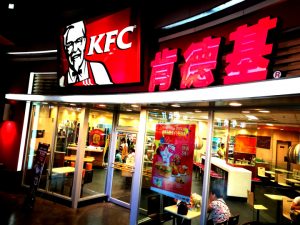 A KFC-branded Android smartphone released in China is the latest special edition phone from Huawei. The phone has been released to commemorate the chicken chain’s 30th anniversary of entering the Chinese fast food market.

KFC made the announcement about the partnership with Huawei in a post on its Weibo account. Huawei is one of China’s biggest smartphone makers. The company was founded in 1987 in Shenzhen. The company ranked third in terms of market share in the global smartphone market in the last quarter of 2016.

Chinese consumers love KFC. KFC is known as one of the most powerful foreign brands in China. Its first restaurant in China opened a short distance from the Tiananmen Square in Beijing in November 1987. KFC is now the largest restaurant chain in the entire country with more than 5,000 locations as of early 2017.

The special edition red KFC phone is a version of the Huawei Enjoy 7 Plus. It’s has a 5.5-inch screen, is powered by a Snapdragon 425 processor, and comes with 3GB of RAM and 32GB of storage that can be expanded up to 128GB via a microSD card.

On the back of the device, there is a fingerprint sensor and a laser-etched Colonel Sanders logo. The phone also comes with 10,000 “K dollars,” a digital currency used by KFC in China and access to K-music, the new jukebox function on the KFC app. The music app lets you create playlists and share them in the restaurant.

Only 5,000 of the phones will be made and the plan is to sell them exclusively in China, although a few units might be re-sold internationally. The phones will be available for sale on the fast food company’s online store starting July 13. The special edition devices will cost 1,099 yuan ($161.91) per unit.

KFC released an official statement about the limited edition phone, but Google Translate has difficulty when it comes translating Asian languages to English, so the statement is difficult to comprehend. The best translation of the statement reads:

“Kentucky China 30 years from 1987 to 2017, 30 years accompanied by the taste of the times, suck refers to the aftertaste! Kentucky together with Huawei joint cooperation, the introduction of Huawei Chang enjoy 7 Kentucky commemorative version of gorgeous struck. Commemorative Edition laser back carving, pre-installed Kentucky Super APP, with WOW member 10 thousand K gold, but also the first to experience k-music song function. Limited to 5000 will soon be on sale, waiting for you to grab!”