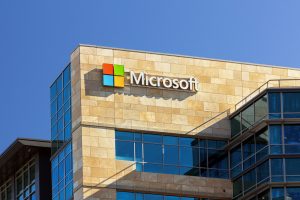 Microsoft Corp. (NASDAQ:MSFT) reported better-than-expected quarterly profit and revenue for the fourth quarter of its fiscal year, ended June 30. Microsoft reported net income of $7.7 billion, or 98 cents a share, on revenue of $24.7 billion in the quarter. Analysts predicted revenue of $24.3 billion and net income of 71 cents a share. Revenue rose 13 percent to $23.3 billion, making it the best quarter for revenue growth in nearly two years.

Commercial cloud revenue was $18.9 billion on an annualized basis, getting close to the $20 billion target the company set for the fiscal year that started July 1. Both corporate and consumer users are switching from older Office programs to the cloud subscriptions, providing more stable and recurring revenue. Microsoft CEO Satya Nadella said in a conference call with investors, “We will continue to invest in high-growth opportunities, lead innovation in cloud and AI, and bring our technology and products together into experiences and solutions that unlock new value for customers.”

The company said it recorded $306 million in restructuring charges in the quarter for its reorganization. Earlier this month, the company announced it was cutting thousands of sales jobs. Nadella described the restructuring as part of a shift in skill sets to adapt to changing demand.

Microsoft said it now expects revenue in the current quarter to be between $23.6 billion and $24.3 billion. Analysts have estimated revenue of $24.2 billion for the current quarter. The company’s stock rose 1.8 percent following the financial report, before falling about 1.6 percent on the lower revenue guidance. Microsoft shares have risen 19 percent since the beginning of the year. The company’s share price has more than doubled since Nadella was named CEO in February 2014.