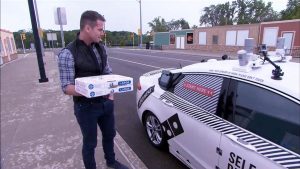 Domino’s Pizza and Ford have teamed up for a research trial in which Ford vehicles equipped with technology for self-driving will be delivering pizzas to regular customers, in an attempt to determine how it will be accepted by everyday people.

The test will use Ford Fusion Hybrid Autonomous Cars that are outfitted with containers to hold pizza that Rous Enterprises a partner with Domino’s designed to keep pizza warm during their trip from store to consumer. The boxes unlock when the customer types a unique delivery code.

The vehicles are to be sent to randomly selected customers at Domino’s who order pizzas in Ann Arbor, Michigan, with the ability of the customer to opt in for receiving the pizza from an autonomous vehicle or opting out and choosing a regular delivery from a human-driven vehicle.

Ford considers the user and customer experience aspects of self-driving technology one of the core parts of the platform it is currently developing.

This is not something Ford is used to doing, as its done much to improve its vehicles from the perspective of core technology over time, but has decades worth of experience with its categories of consumer to be aware of what they are wanting to a certain degree in the next generation, but with autonomous vehicles much more remains unknown.

A Ford spokesperson said that usually when it comes to the auto business, the customer is known and you plan certain changes based on the customer, but when it comes to autonomous vehicles the industry is still attempting to understand the consumer and determine what needs to be done with the vehicle at the same time that technology is being developed.

Domino’s and Ford have already worked together in the past on several projects, including the building of how to order pizza using the in-car SYNC apps and software platform of Ford.

Their prior relationship resulted in conversations related to the potential for food delivery by autonomous vehicles.

The goal of Ford is building, at scale, fleets of autonomous vehicles that are capable of servicing different industries such as this one.

So figuring out what it is that people want in a transportation or delivery autonomous vehicle, and doing it at this time while details such as the design of the vehicle are being finalized, is very important.