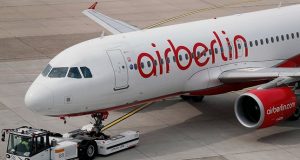 The European Union’s European Commission has approved a bridge loan for Germany based Air Berlin that will maintain the insolvent airline flying while it attempts to find buyers for the company’s assets.

Air Berlin, the second largest German airline, filed in August for bankruptcy protection after its shareholder Etihad Airways had withdrawn its funding following losses over a number of years.

The government of Germany pledged a $170 million loan that prevented the airline’s aircraft from being grounded immediately, and put 8,000 jobs in jeopardy just week prior to the country’s national election.

This measure will give the airline an orderly winding down without distorting competition unduly, said the Commission through a prepared statement.

The money is scheduled to last until the middle of November, which will mean the pressure is on to find a way to divide up Air Berlin.

Lufthansa the flagship carrier in Germany has the backing of the government to take large parts of Air Berlin over. easyJet based in Britain and Condor owned by Thomas Cook are seen as bidders as well.

An analyst in the industry said he expected Ryanair, which has said it would not bid for the assets of the airline, to expand it Germany capacity after the split up of Air Berlin.

British Airways parent IAG might buy an A320 or A330 planes that are left over at reasonable lease prices following the airline being carved up.

There are other investors that have expressed some interest of all or parts of the airlines, though they do not seem as likely to win out.

Alexander Skora a prominent businessman said on Monday that he proposed returning the airline to what it was before a holiday carrier that served destinations like Majorca.

Thus far Skora has invested for the most part in real estate and in startups, but said he was interested in the books of the carrier and would decide then whether he would submit a formal bid together with a consortium of unnamed investors from Canada, the U.S. and Israel.

Hans Rudolf Woehrl an aviation investor in Germany expressed interest at one point in Air Berlin in its entirety but retreated from that to search for partners.

Former CEO of EnBW a German utility Utz Claassen is reported to be interested but would not confirm if he was as he cited confidentiality.