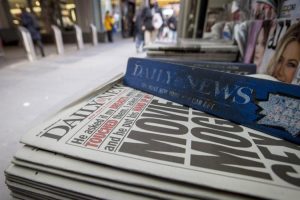 The chain of newspapers led by Michael Ferro the software entrepreneur bought the tabloid New York Daily News, adding the largest media market in the nation to its mix of dailies that include the Chicago Tribune, Baltimore Sun and Los Angeles Times.

Tronc Inc. has agreed to pay $1 as well as assume pension and operational liabilities for the paper in an agreement that included 100% ownership of a New Jersey printing facility, said the group based in Chicago through a prepared statement late on Monday.

The liabilities and pensions that Tronc will take over equal over $100 million, according to those familiar with this deal, who requested to remain anonymous.

Acquisition of the paper, which is nearly 100 years old, is the highest profile deal in media thus far for Ferro, who acquired a stake in Tronc in 2016 through his firm Merrick Ventures and said he wanted journalism to be saved.

The New York Daily News has been awarded 11 Pulitzer prizes, with the latest coming this year for its public service journalism, said Mortimer Zuckerman the publisher and owner dating back to 1993.

Tronc and its rivals that included Gannett Co. and Hearst Corp are acquiring more papers so they have economies of scale as the drop in print advertising and small gains in growth of digital ads cut valuations for newspaper and magazine brands.

During 2016, in the U.S., 28 deals took place where 50 daily newspapers changed owners. The deals were driven for the most part by families as well as small groups that were exiting the business.

Arthur Browne, the editor-in-chief of the paper, will stay in that same role and was named publisher, said the statement.

He is to report to Timothy Knight the President of Tronc. The newspaper group will have operations after this purchase in 10 major markets in the U.S. and over 80 million unique digital visitors monthly.

The Daily News has for years had a rivalry with the New York Post, but gained attention the last year with its covers that have been highly critical of President Donald Trump.

This deal arrives as the largest newspaper owned by Tronc, the Los Angeles Times, undergoes a shakeup in management after four of its top editors were ousted in August.