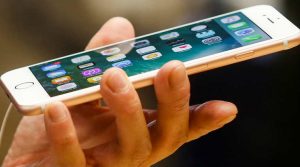 Apple Inc. is expected to launched the much anticipated “iPhone 8” Tuesday, and hopes that the number’s auspicious connotations across China help to turn its fortunes around in the largest smartphone market in the world, following six straight quarters of dropping sales.

However, shoppers in China are counting the phone’s cost already, with the most recent model expected to have a price tag near or above the $1,000 mark, close to double the average salary per month in China.

The success in China of the next iPhone is crucial for Apple, which has watched its once highly sought after handset drop to fifth in the country behind phones from local makers Huawei Technologies, Oppo, Xiaomi and Vivo.

For Apple, Greater China including the mainland, Hong Kong and Taiwan represented 18% of the sales of iPhones during its quarter that ended in July. That makes it the top market for the company after the U.S. and Europe.

However, those sales have declined steadily and from one year ago are down by 10%, in contrast to growth in every other region.

In addition, the share of iPhone in the smartphone shipments for China was down to 9% during the first six months of 2017, down from its 2015 figure of 14%.

While Apple’s iPhone 6 in 2014 was able to take China by storm, models since then have been received with a far more muted response by consumers.

One iPhone owner said she would wait until the price dropped as it was just too expensive for her. She added that she might wait for the successor of the new phone, when prices drop, even though the number 8 was a good number’

Eight in China is the luckiest number since it has a similar sound to the Chinese phrase that means “to get rich.”

One industry analyst in Shanghai said Apple needed to launch a new handset that was highly innovative this week. However, he added, the increasing clout held by local rivals to Apple will make it difficult for the company and it will have a hard time maintaining pace.

Apple’s iPhone 7 was hit with the perception it was too similar to previous models. For the latest model, despite rumors of wireless charging, facial recognition and an advanced touchscreen, netizens in China have not yet replicated the mania that took place online around prior launches of iPhones.

Kujira Trading Down 15.6% This Week