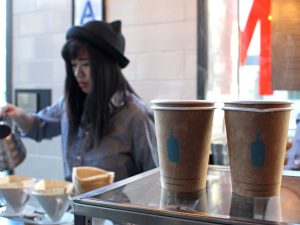 Nestle SA will purchase Blue Bottle Coffee as the Switzerland based company looks to bolster its presence in the U.S. amidst growing demand for upscale coffee blends.

Nestle is paying $425 million for a stake of 68% in the company, which is based in Oakland. California, said a source familiar with the deal. Blue Bottle sells its coffee directly to the customer online and has 40 shops it operates in the United States and Japan.

The number should grow to 55 before the end of this year, up from just 29 to start 2017 said Nestle on Thursday.

Nestlé’s position of No. 1 in the worldwide packaged coffee market is being challenged by investment company JAB Holding controlled by the Reimann family in Europe. The family has spent over $30 million growing its coffee empire that includes acquisitions of Peet’s and Keurig Green Mountain amongst others.

One analyst on Wall Street said that despite the deal’s prices, he is positive about it, as it demonstrates the focus Nestle has in one of its most important growth categories.

Nestle CEO Mark Schneider has focused on coffee as one of the company’s largest opportunities for growth, as he increases investments in different niche brands such as Freshly the prepared food maker and Sweet Earth the maker of vegetarian burritos.

As for coffee, he is focusing on growing sales in the U.S., which is the largest coffee market in the world. Nestle has sales in the U.S. of its Nespresso machines, but trails Keurig in that particular category.

The move underlines the focus by Nestle on investing in categories of high growth and acting upon consumer trends, said Schneider in a prepared statement.

The giant food company is eager as well to expand its retail store presence in the U.S. Blue Bottle makes a cold brew, ready to drink product that can be purchased at some Whole Foods Market stores and is attempting to get packaged coffee into the organic grocery chain just acquired by Amazon.com.

This deal will also give Nestle more access to cafes during a time when Starbucks has faced declining growth across the U.S.

The company has worked to maintain freshness standards while seeking to grow its presence in retail and could be available on a nationwide basis in Whole Foods by 2018, according to Bryan Meehan the CEO.