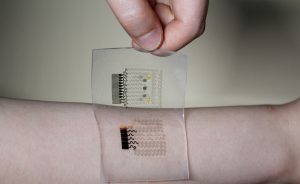 Scientists in New York have developed a new paper-based, self-powered wearable sensor that allows people with diabetes to measure their levels of glucose from sweat during their exercising.

The most widespread current methods for self-testing for glucose involve the monitoring of levels of glucose in the blood.

However, conventional measurements are not suitable in preventing the onset of hypoglycemia while exercising, said Assistant Professor Seokheun Choi from Binghamton University in New York.

There exist different methods for measuring the glucose levels in blood. They include the pricking of skin for blood samples. However, doing that during an exercise routine risks the blood becoming contaminated as it mixes with the body’s sweat or could lead to skin irritation said Choi.

The professor added that the blood sample method requires diabetics to carry several accessories with them during any form of physical activity including alcohol swabs, lancets and a glucometer that can prove to be cumbersome.

Therefore, researchers developed a wearable, disposable patch that is self-powered that allows for the monitoring of levels of the body’s glucose in a non-invasive way using human sweat.

The wearable is a single-use biosensor that integrates a paper-based, vertically stacked, glucose/oxygen fuel cell into an adhesive patch that appears to be a standard Band-Aid.

Choi added that the paper-based patch attaches to the skin and draws in sweat to its reservoir where the sweat is converted from chemical energy to electrical energy and is able to monitor the level of glucose without the need for any sophisticated instruments for readout or external power source.

Glucose sensing that is sweat based has become attractive in the managing of hypoglycemia that is exercise induced because measurements are performed during or immediately following an individual’s exercise, when there is a sufficient amount of sweat that can be obtained to give an adequate sample.

This in turn alleviates the shortcomings of the conventional sweat censors that are non-invasive, which can be hampered due to the difficulty in obtaining the right amount of sweat to carry out an analysis, due to sample evaporation and the long time relatively speaking required for collecting a sample.

Researchers said the new sensing platform holds great promise for the efficient management of diabetes, and an integrated system with an easy to understand readout that allows for continuous glucose monitoring of a non-invasive form.