Reservations for Restaurants Can Now Be Made on Airbnb 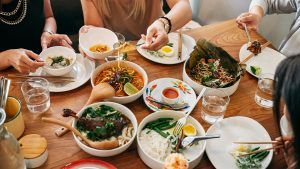 Short-term rental company Airbnb announced Wednesday that users are now able to book reservations for restaurants on the Airbnb app.

The new reservation service has been made possible due to a partnership with restaurant reservations app Resy.

Airbnb has now fully integrated Resy onto its app. At this time, users are able to book reservations at close to 650 restaurants located in 16 cities in the U.S., such as San Francisco, Los Angeles and Washington, D.C.
This service will be expanding to more markets in the U.S. in the short term and will eventually include international restaurants.

The experience of reserving accommodations and making restaurant reservations should not be disjointed, and real opportunity exists to put the two together, said Resy CEO and cofounder Ben Leventhal.

The Resy CEO added that when he is in Nashville, San Francisco or for that matter anywhere, the thing that comes to mind first is where he will eat.

Using the tab for restaurants on the app or website of Airbnb, users are able to search for their restaurant by time of day, cuisine or look at a map to see if a restaurant is located in a specific area of the city.

For some cities, curated recommendations for restaurants appear, like Italian dining, can’t miss brunches or hotspots.

Those are handpicked by Resy and Airbnb based upon a myriad of criteria.

Airbnb started tested restaurant reservations through Resy this past May with several San Francisco restaurants.

Earlier in 2017, Resy announced a funding round of $13 million that Airbnb led. Resy is currently operating in 115 U.S. markets with bookings being offered at nearly 900 restaurants.

Similar services are offered by both Reserve and OpenTable.

This move is part of an ongoing effort by Airbnb to move beyond just housing, said one of the company’s spokespersons.

The larger picture is how Airbnb creates the best trip possible and how it makes the technology side very easy, said the spokesperson.

In 2016, Airbnb launched Trips, a feature that allows user to book trips with local residents in the Airbnb app. The activities, known as Experiences, range from making pottery to surfing to sharing a meal. Locals are paid by users for their experiences.

In addition, Airbnb allows its users to find different events based upon interest and location. Experiences involving food were some of the more popular ones. Experiences started in 12 cities and now is in over 1,800.

Bitcoin Private Trading Down 13.1% This Week

BidiPass Reaches One Day Volume of $14.00