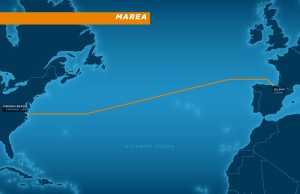 Facebook, Microsoft and Telxius the telecoms infrastructure business announced that they had completed the highest ever capacity subsea cable to cross the Atlantic Ocean.

This new cable has the capacity to transmit 160 terabits of data per second, is equal to the streaming of 71 million HD videos all at once, and is 16 million times faster than an average connection of home internet, claims Microsoft. The cable becomes operational in early 2018.

Known as Marea, which in Spanish means tide, the cable stretches for over 4,000 miles and lies at 17,000 feet below the surface of the ocean and extends from Virginia Beach, Virginia to Bilbao, Spain.

Marea stretches south of the majority of existing cables that cross the Atlantic. Because of that, Microsoft said the cable would provide resiliency for people living in the United States and Europe through safeguarding against any natural disasters or other events that could cause connection disruptions such as those that took place at the time of Hurricane Sandy.

For Facebook and Microsoft, more importantly, both companies have huge data center operations located in Virginia.

Brad Smith the President of Microsoft said the Marea arrives at a very critical time, as submarine cables across the Atlantic already carry 55% more data than do trans-Pacific routes and 40% more than between the United States and Latin America. No question, the demand for data flows on this cable will continue increasing, said Smith.

For the majority of the route the data cable, which is made up of eight different pairs of fiber optic cable enclosed within copper, lays on the floor of the ocean. In some areas it is buried so it is protected from shipping lanes, usually in areas that are nearer the shore.

Microsoft in one of its blog posts said this project had been completed close to three times faster than was expected, in less than two years.

The cables are called an open design that allows them to evolve as does technology and as the internet user population across the globe jumps.

The Marea cable will also provide a path to hubs in the Middle East, Asia and Africa, where the next billion users of Internet are expected to be from.

Tech companies are moving more and more into infrastructure space, funding cables themselves, instead of joining telecom consortiums that operate undersea cables now in place.

With the new Marea cable, Microsoft and Facebook’s investment allows them more control over the data they need to quickly move across the globe.