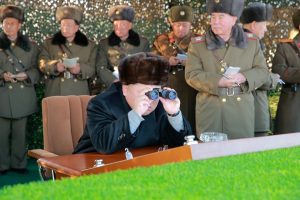 North Korea has said that close to 5 million of its citizens offered to re-enlist or join the army following threats made by U.S. President Donald Trump that he would totally destroy the nation.

Close to 4.7 million workers and students including more than one million women volunteered to join the army amidst the conflict with South Korea and the United States, said its Korean Central News Agency that is state run.

This report claims that citizens in North Korea sought to become a member of the army to defend socialism and the leader and crush the imperialists from the U.S. who run amuck to destroy the Democratic People’s Republic of Korea.

Younger North Korea citizens have written threatening slogans in petitions including blowing up the empire of evil with nuclear bombs, reported the KCNA.

There has been an escalation in tensions between North Korea and the U.S. since the secretive nation began showcasing the progress it has made in nuclear weapons development including testing missiles and exploding what it claimed to be a hydrogen bomb.

Last week in New York at the United Nations, Trump said that the North Korea regime was on its own suicide mission and that the U.S. was prepared to totally destroy it, if it was forced to defend an ally or itself.

Reports from inside North Korea claiming huge increases in the military are not new and often come at the same time there is an increase in tensions with other nations.

Media in North Korea said in early 2017 that more than 3.5 million people had suddenly enlisted in the army, when the U.S. strengthened its sanctions against the country.

Most experts remain skeptical of reports that the military is growing in size since the country of just over 25 million already has an army that is disproportionately large.

The country forces most citizens, including it women, to a compulsory military service.

The U.S. State Department has said that army has 1.2 million members making it the worlds fourth largest after only U.S, India and China.