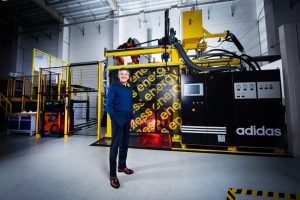 In a small production room that appears to be hospital-like clean, small white plastic beads the size of a pea pour into an Adidas shoe box the size of a minivan that has three stripes on its side.

Over a period of just seconds, the machine melts and molds the beads into Adidas running shoe soles, with just one worker necessary to wedge in pieces of plastic known as stability bars.

This is the new “Speedfactory” by Adidas AG, where the maker of sports footwear is looking to prove it is profitable to produce its footwear in developed, high-cost economies.

Before the start of next fall, this facility, which covers over half a soccer field, will have 160 employees making 1,500 pairs of shoes daily, or more than 500,000 each year.

The plant, which is located between Frankfurt and Munich, and one opening close to Atlanta this fall, will be the key to the effort of Adidas to catch up with Nike, Inc. the industry leader.

The factory replaces the manual gluing and stitching with the bonding and molding done with machines, that churn out shoes in one day, versus two to three months in Vietnam and China, where the components get shuttled from on supplier to another that produce different parts of the shoe.

James Carnes, who has been with Adidas for over two decades and responsible for company strategy, called the machine the biggest revolution in sneaker making history since manufacturing was moved to Asia, or even possibly since shoes for sports were first made.

The new factories use the same idea of H&M and Zara to move more quickly getting its shoes, jerseys and other goods from the sketchbooks of designers to the shelves at Adidas stores.

The Germany-based company said that linking speed with customization is going to allow the company to sell more products at their full prize and keep its customers from shifting to rivals.

Adidas used a Speedfactory prototype to make the Futurecraft Made for Germany running shoe a year ago that was a huge hit, with buyers setting up camp outside Adidas stores to buy one of just 500 pairs for $293.

The athletic shoe and apparel maker is betting it will be able to repeat its hype with similar shoes that are city-themed that will be made at the two Speedfactories. The city-themed shoes will first be for Paris and London this year, and Tokyo, Shanghai, Los Angeles and New York in 2018.