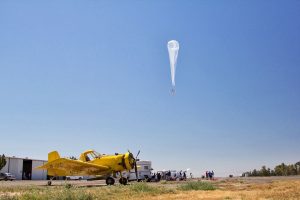 An experimental license has been granted by the U.S. Federal Communications Commission or FCC to Project Loon by Google to provide emergency cellular services across all of Puerto Rico, which recently was devastated by a hurricane.

The license allows the project to deploy a network of balloons that use spectrum in the 900MHz band, having received consent from the carriers already in the U.S. Caribbean island territory.

Over two weeks after Puerto Rico was hit by Hurricane Maria, millions of people in Puerto Rico still do not have any access to vital communications services, said the chairman of the FCC this past weekend.

Because of that, said the FCC chair, innovative approaches must be taken to help to restore connectivity in Puerto Rico. Project Loon is one of those approaches.

This special license, which is just temporary, is needed to support the licensed mobile carriers’ restoration of limited capability of communications in areas of the island and in some of the U.S. Virgin Islands that were affected by hurricanes. The license is eligible from October 6 of 2017 through April 4 of 2018.

The FCC said that all 78 counties in Puerto Rico remain affected by outages of communications service as of Sunday October.

In all, almost 82% of cell sites on the island are not in service. All Puerto Rican counties, with the exception of Catano, Bayamon, Carolina, San Juan, Toa Baja and Guaynabo have more than 75% of their cell sites offline, said the FCC Sunday afternoon.

In addition, there are 22 of the island’s 78 counties that continue with 100% of their cell sites offline. Wireless communications providers have deployed cell sites that are portable using light trucks.

Google started testing its Project Loon, which sends transmitters in balloons that are high-altitude to give large rural areas low-cost broadband. Last February the company deployed the balloons in Sri Lanka after it entered into a spectrum deal with the country’s government.

The balloons are floating at 20 kilometers in the stratosphere. Google stationed a launch locations for the balloons last year in Puerto Rico, saying earlier in 2017 it would uses the launch pad for sending balloons to Peru which would provide service there following mass flooding.

In May, Project Loon said that it responding to the flooding in Peru, it worked with the government of Peru and Telefonica to deliver basic connectivity to Internet for tens of thousands affected in the areas close to Chimbote, Piura and the capital of Lima.