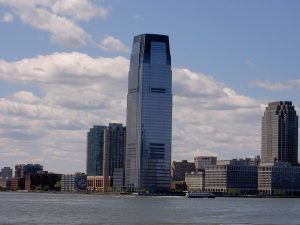 Goldman Sachs Group posted profit Tuesday for its third quarter that was down 3% compared to the same period one year ago, but its quarterly revenues were up 2%.

Both its revenues and earnings per share beat Wall Street expectations. CEO and Chairman Lloyd Blankfein said that the overall performance in 2017 had been strong and provides a solid foundation on which to execute then deliver the company’s growth initiatives.

During trading before the bell on Tuesday, Goldman Sachs shares increased 1.25% following the release of its financials.

Net earnings for the company reached $2.13 billion which were up from the previous year’s same quarter of $2.09 billion.

Operating expenses reached $5.35 billion during the 2017 third quarter, which were for the most part were unchanged in comparison to the 2016 third quarter.

Goldman Sachs’ non-compensation expenses reached over $2.18 billion during the just ended 2017 third quarter, which were 4% more than the same quarter in 2016 and up 2% from the 2017 second quarter.

The increase in comparison to the same quarter last year was due primarily to more expenses that were related to its consolidated investments as well as the company’s online deposit and loan platform.

These increases were able to be offset partially by reduced occupancy expenses. During the 2016 third quarter there were $63 million in exit costs from different office space.

Revenues, which include its net interest income, during the quarter, were up by 2% to end the three-month period at $8.33 billion compared to $8.17 billion for the same period one year ago. Wall Street was expecting $7.54 billion in revenues during the quarter.

Net revenues for its Investment Banking unit reached $1.8 billion during the quarter, which were 17% higher compared to the 2016 third quarter.

Its net revenues for its Institutional Client Services reached $3.12 billion for the third quarter, which were 17% less than the same quarter in 2016.

Its Fixed Income, Currency and Commodities or FICC net revenue reached $1.45 billion during the third quarter but was 26% less than the same quarter last year, due to substantially less net revenues from interest rate products, commodities and credit products, and less revenues in currencies, that were offset partially by higher mortgage revenues.

The Goldman Sachs Group board of directors declared on Monday a 75-cent dividend per share of common stock that will be paid December 28, 2017 to all common stock shareholders as of November 30, 2017.