Head of the FBI Calls Encryption a Big Problem 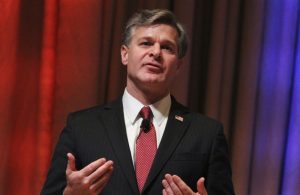 On Sunday while speaking to Philadelphia police officials, Federal Bureau of Investigation Director Christopher Wray said encryption had been hindering investigations at the FBI. He said his agency is unable to gain any access to data of close to 7,000 mobile devices.

Wray said the problem was huge, and that it impacted many different investigations from human trafficking to narcotics, to organized crime, gangs, child exploitation, counterintelligence and counter terrorism.

Encryption on mobile devices makes data on them unreadable without possessing the key, meaning messages or conversation sent through any messaging apps that are encrypted such as WhatsApp are only accessible via the device, which usually is protected through biometric data such as a fingerprint or a password.

The comments made by Wray will add to the debate over encryption that gained nationwide attention following the San Bernardino massacre in 2015.

FBI agents could not view the data on one of the shooter’s iPhone, which might have held crucial information for the agencies investigation.

Apple did not act on a court order for the phone to be unlocked, saying to do that would set a very dangerous precedent. Eventually the FBI was able to get assistance from a company that helped bypass the phone’s encryption.

Senior executives from Google, Facebook, Twitter and Microsoft earlier in 2017 issued a joint statement in response to Home Secretary Amber Rudd from the UK calling for their assistance in investigations of terrorism saying they would assist in probes to the best they could, but would not give any concessions when it related to encryption.

The statement said the companies were committed to making their platforms hostile for those seeking harm and have worked on the issues from many years. It added that all of the signees shared the commitment of the government to ensure terrorist have no voice online.

Advocates for online privacy have always argued that ending the encryption would make people less safe due to leaving people more vulnerable to online criminals, hackers and surveillance by the government.

One director of an advocacy right groups said that it was right that tech companies should help police and intelligence agencies in investigations into terrorist activity or specific crimes, when possible, with the help requested via warrants, but that process should be properly monitored and regulated.