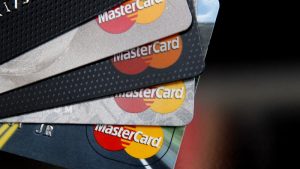 On Tuesday, MasterCard posted revenue and earnings for the quarter that beat Wall Street expectations. The payments processing company posted earnings per share of $1.34 compared to expectations of $1.23.

Revenue at the company reached $3.4 billion in comparison to Wall Street expectations of just over $3.28 billion.

On the news, shares of MasterCard were up 1.2% in trading before the opening bell.

CEO and president at MasterCard Ajay Banga said the company was executing well on its strategy and pleased it delivered another three-month period of record results.

Banga added that as the world continues to be more connected, MasterCard remains focused on security. The investments made by the company in technologies such as tokens, biometrics, artificial intelligence and encryption all have redefined how both consumers as well as transaction are being protected.

Net income at MasterCard rose ending the quarter at $1.43 billion compared to $1.18 billion for the same period one year ago.

On September 30, customers of MasterCard had issued a total of 2.4 billion MasterCard and Maestro cards.

The gross dollar volume for the third quarter was up by 10% while the purchase volume increased 11%.

MasterCard during its third quarter said it had repurchased over 6.4 million shares for $838 million, and in all has returned $236 million to its shareholders as dividends. The payments processing company has $2 billion that remains under its current program for repurchasing shares.

MasterCard was hoping to build from its momentum during the first two quarters of 2017, when it posted strong financials, thanks to strong growth in payment volume, a favorable environment for foreign exchange, and new innovation additions to its lineup of cards.

Like its rival Visa, MasterCard receives its revenue through facilitating transactions involving debit and credit cards and the revenue streams of both are linked closely to the spending power of consumers.

Consumer spending across the U.S., which represents over two-thirds of the economic activity in the country, has moved upward, supported by a labor market that is tightening.

MasterCard announced recently that its customers would not be required to sign their receipts any longer when they are making purchases with their credit card. The payment network has been eliminating the requirement of signatures when purchases are made using the card at retail dating back to April.

Now merchants in both the U.S. and Canada will decide if the cardholder must sign or not.