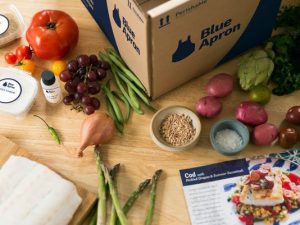 Blue Apron Holdings beat estimates by analysts on Wall Street for revenue during its third quarter, which reflects on its effort to get customers to buy more money and sent shares higher during early Thursday trading.

However, the company reiterated its forecast that shows growth would slow during the final three months of 2017.

Sales were up by 2.5% to just over $210.5 million during the quarter that ended September 30. Despite a drop in customer count for the second consecutive quarter, Blue Apron took in more orders for meal kits during the three-month period than it did for the same quarter in 2016.

Shares of the company were up 4.9% during early Thursday trading on Wall Street.

Blue Apron reiterated the forecasts for its net revenue during the second six months of 2017 of between $380 million and $400 million. That implies that sales for the fourth quarter will be as high as $189.3 million, which would equal a drop of 12% from the same period last year.

Blue Apron has encountered problems on Wall Street losing over half its market valuation since late June when it went public with its initial public offering, reflecting the increase in competition from other upstarts such as HelloFresh as well as giants in the marketplace like Amazon.com, and has faced other challenges such as its warehouses.

The pitch by Blue Apron to investors prior to its IPO was that it would tap into the opportunity worth billions of dollars in offering fresh food on the Internet, selling its value on growth.

However, sales have shrunk during 2017 each quarter and customers are fleeing while Blue Apron pares its costs.

In October, Blue Apron slashed 6% of its entire workforce, following a prior set of layoffs and a hiring freeze during August.

CEO Matt Salzberg has said that shrinking its workforce was needed for growth in the future. Blue Apron also has spent much less for marketing, which is correlated closely with growth in revenue.

Marketing expense for the quarter reached $34.2 million equal to a decline of 31% compared to the same period last year. The company has over 856,000 clients, representing a drop of 5.6% from the same period one year ago and a drop of 9.2% from the previous quarter.