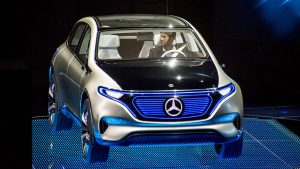 Tesla has seen itself have a meteoric rise to the top of the electric vehicle field, but the upcoming five years could be the biggest challenge it has faced to date.

The small, underdog electric vehicle maker will soon face major automakers from around the world launching electric vehicles, with perhaps the largest rollout of them all being Daimler, the parent company of Mercedes.

The German automaker is planning to electrify its vehicles before the start of 2020 and will be investing over $11 billion to make sure it happens.

It will not be easy for Daimler or any other automaker to leapfrog Tesla. The company secured brand loyalty that is equal to that of Apple, which is attributed to the admiration of CEO Elon Musk’s commitment to making a sustainable future.

Tesla has pushed the electric vehicle industry in ways never seen prior to now, from implementing updates over the air to making a challenge to the traditional model for dealerships.

As good as it is however, Tesla has its weaknesses, with likely its biggest being executing on production. Its Models S and X have both suffered from delays and the electric automaker had not yet overcome manufacturing hurdles as Tesla only produced 260 of its Model 3s during the third quarter while it targeted 1,500 of the sedans because of bottlenecks in the production.

Daimler announced two months ago it would be investing $1 billion in a plant in Alabama to build its electric SUV, which it scheduled to reach the market during 2020. Many news outlets quickly pointed out that the Alabama plant was directed that at Tesla, although Musk does not see it like that.

Daimler’s recent comments on Twitter to Tesla is an acknowledgement that in order to win the race in electric-vehicles it requires convincing the consumer that cars made by Mercedes will be able to compete with products made by Elon Musk.

If the electric vehicle is inevitable for the future, Daimler cannot ignore the position Tesla has in that market.

Like all car companies in Germany, Daimler has an identity with diesel engines, as the Mercedes is seen as the classic Autobahn speed machines and not the high-tech driverless models of the future.