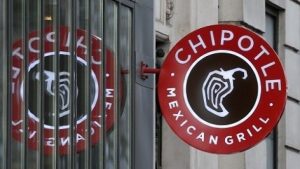 Chipotle, the embattled restaurant chain has been hit again with another claim of foodborne illness. This time the claim is by an actor in Hollywood.

Jeremy Jordan of Supergirl fame posted a story on Instagram alleging the food from the Mexican burrito maker forced him to go to the hospital and almost killed him.

Jordan said he knows he has been an advocate for them during the past, but they are terrible. His post showed him lying on a bed in the hospital with an IV hooked up to his arm. He said that as followers and friend could see he was in the hospital and getting fluids because the food he ate did not agree with him and he almost died.

A spokesperson for Chipotle said that there have been no further links that support the claim by the actor and added that Chipotle was sorry to have heard Jeremy had been sick.

The spokesperson said the restaurant chain has contacted Jordan directly regarding when and where he had eaten, but no other reports have been received claiming sickness at the same restaurant in which he had dined.

Another spokesperson for the chain said Chipotle takes every claim seriously, but no link of any kind can be confirmed given the details that Jordan has shared with them.

A spokesperson for the actor did not answer a request to update the health status of the actor.

However, the event is just the latest of several crises for the maker of burritos. Over the past four years, Chipotle has seen several negative reports hit its popularity and sales surrounding food.

The most notable was in July 2015, its first outbreak of E.coli was reported in Seattle as five people became ill.

In addition, during that same period, 17 restaurants based in Minnesota were linked to an outbreak of salmonella that caused 64 people to become sick. The source for that outbreak was identified later as contaminated tomatoes.

In October of 2015, the biggest nightmare of all for Chipotle unfolded when E.coli cases began popping up across the country including in California, Maryland, Illinois, New York, Minnesota, Oregon, Ohio, Washington and Pennsylvania, forcing Chipotle to close over 40 restaurants temporarily.

On Monday, following the report shares were lower by 1.2%.