Spat Between Boeing and Bombardier Could Affect Trade Deals 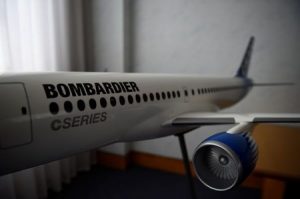 On Monday, Boeing and Bombardier traded barbs over the U.S. plane maker’s claim that its rival in Canada benefited from illegal government subsidies in the billions of dollars and sold its most recent airliner in the U.S. at less than cost.

During a tense U.S. International Trade Commission hearing, Boeing accused the Canadian based Bombardier of hurting its ability to sell its 737s in the United States market in the last stages of a trade dispute that is due to end in February.

Bombardier responded to the accusations by saying the large order book for Boeing’s 737 shows no adverse effect has been felt by Boeing for Bombardier’s CSeries jet and Boeing does not make an aircraft that completes with its new model.

A representative for Bombardier said Boeing was making lots of money and with its 737 orders backlogged there are no signs of any difficulty for the plane maker.

If the commission decides in favor of Boeing, it could effectively keep airlines in the U.S. from using the CSeries jet made by Bombardier, by imposing a close to 300% duty on them, which would be one of the largest ever duties imposed for an economy that is market-based.

The Department of Commerce in the U.S. was going to finalize the duties Monday or Tuesday.

If the commission sides with Bombardier, the Boeing says its smallest model of 737 could face an unfair competitive disadvantage for decades from the new CSeries.

The ambassador from Canada to the U.S., David MacNaughton, warned a finding by the ITC of material harm against Boeing could represent a violation of the World Trade Organization agreements and possibly prompt a complaint that is more formal with the worldwide trade group.

MacNaughton told members of the panel that the assertion by Boeing that future Canada imports threaten material injury is based on only the type of conjecture and speculation that is not allowed under both international and U.S. law.

Earlier in December, Canada ended its plans of buying 18 Super Hornet Fighter jets from Boeing, underlining the anger Ottawa has over this trade challenge.

This case originates from a sale in April of 2016 to Delta Air Lines for 76 CSeries jets. Boeing has claimed that Delta paid only $20 million for each plane, which it says is far below the estimated $33 million cost and what Bombardier has charged in Canada.

Airbus SE the European plane maker, which is acquiring a controlling interest in the CSeries program has a competing plane and said it would add a second production line for the CSeries at an Alabama factory making the plane a U.S. product.