Live Nation Buys Assets of Ticketing Start Up After Settling

Songkick’s specialty was artist presales – selling large batches of tickets to fans in advance of a concert, often as much as 8% of the entire tickets for a particular show.

Two years ago, the ticketing startup that operated from a Brooklyn loft, filed a suit against Live Nation, the huge concert business. The suit between David and Goliath included accusations that Live Nation had abused its market power.

However, on Friday, with less than two weeks to go before the trial was to start, Live Nation announced it settled the lawsuit for $110 million plus an additional sum that was undisclosed to acquire some of the remaining technology patents and assets of Songkick.

In a prepared joint statement, Live Nation President Joe Berchtold said the two were pleased we could resolve the 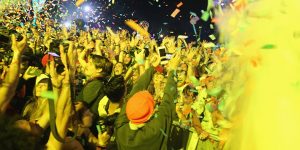 dispute and avoid a costly and protracted legal proceeding, while also acquiring assets that are valuable going forward.

Matt Jones the CEO for the parent company of Songkick, Complete Entertainment Resources Group, thanked artists and employees who had contributed much to their many successes the past decade.

Songkick during the summer of 2017 sold a main business it owned which was a concert recommendation app, to Warner Music Group, which is owned by one of the major investors of Songkick Access Industries, and later shuttered its other remaining operations.

The case for Songkick hinged on rights to sell tickets. The presales the company specialized in serving as a way to keep scalpers from buying and reselling tickets.

Songkick claimed that Live Nation had interfered with its business through blocking access to the presale tickets and demanding fees on sales of the tickets that Songkick had handled.

However, Live Nation, which filed a countersuit, argued its contracts with the venues allowed it to determine how the tickets would be sold. The suit by Songkick accused Live Nation as well of threatening artists not to work with Songkick.

This case was punctuated as well by accusation of Ticketmaster corporate espionage, and had large amounts of court filing that at times showed embarrassing communications amongst top executives at Live Nation.

Many with the music industry had been skeptical about the case brought by Songkick, and it lost several pretrial motions, but until just recently was insistent with going forward with its case.