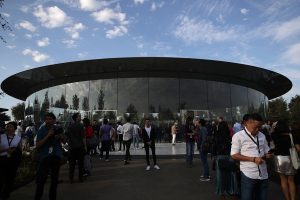 Apple Inc. will be opening a new campus that is part of its new five-year, U.S. investment plan of $30 billion. The tech giant also announced it would make one-off tax payments of approximately $38 billion on overseas cash, one of the biggest corporate plans announced since the tax reform was passed and signed by U.S. President Donald Trump.

The company has come under increased pressure to make investments in the U.S. since the presidential campaign of 2016 when Trump targeted the Cupertino, California based iPhone maker for having its products made in factories across Asia.

While no plans have been announced that would indicate Apple is planning to change the practice, and experts believe it is not practical economically to make iPhones in the U.S., the company has started to emphasize its economic impact in the U.S. from the developers selling software from its App Store to the billions of dollars it spends each year with suppliers in the U.S.

Between its spending plan, the hiring of 20,000 workers, tax payments, and business it has with suppliers in the U.S., Apple estimated that it would spend as much as $350 billion in the U.S. over a period of five years.

However, it did not say what percentage of the plan was actually new or how much of its cash abroad that totals $252.3 billion would be brought home.

The $38 billion it must pay in taxes is in addition to U.S. issued debt of $97 billion to pay for previous dividends and share buybacks.

Some investors believe the investments in the U.S. would give Apple more room to make additional stock buybacks or to pay dividends without any criticism. Apple shares Wednesday ended the day 1.7% higher.

Trump called Apple’s move a victory for efforts he has made. He tweeted that he promised his policies would give companies such as Apple a way to repatriate large sums of money and it was great to see Apple has followed through because of the tax cuts.

Apple CEO Tim Cook was asked during an interview if the announcements of job creation were related directly to the tax plan of the Republicans. His response was measured.

Close to a third of the new spending by Apple will be for data centers that house its services of the App Store, iCloud, and Apple Music, which is a sign of the increasing importance of the subscription service to the company that is known for its gadgets and computers. At present, Apple data centers are located in seven states.