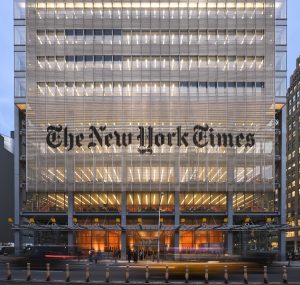 The New York Times has podcasting perfected with “The Daily,” and now wants to break into television by having a weekly news program.

The Times, according to a recent job listing, is looking to hire an executive producer for its new series.

In addition, The Times has been having talks with different premium cable channels and streaming services about signing a possible distribution deal, said an analyst who is aware of what is happening related to this.

Left/Right, a production company, has joined and has created a number of segments to use as tests.

The job listing speaks of Left/Right as well as provides several more indications that the Times is putting together an ambitious venture. It said that the series would have groundbreaking investigations, reporting on the ground, interviews never before seen and new formats not yet invented.

Times editors are said to be discussing a program for once a week of 30 minutes although length may vary.

This new series will have Times journalists featured both at work as well as in the field. A spokesperson for the paper said the Times has experts so they will be showcased.

The news series could help unlock a new revenue source for the Times, which is seeking more and more subscriptions to help offset the declines in advertising revenue.

While there have been no specifics released about distribution, a cable channel or streaming service would be a fee for the rights to the new series.

There are other news operations that do not have a television arm that have sought similar opportunities. For example, Vox Media has sold shows to different distributors, while BuzzFeed has entered into deals with different production companies. Vice has a pair of news and documentary programs appearing on HBO.

The idea the Times has is slightly different in part due to it coming out of a print newsroom. This idea is the look at the important news of the week through Times journalists’ eyes.

The job listing for the editor/executive producer for the series said that the producer would be given access to every inch of the organization.

That is what drives the Times’ podcast “The Daily,” which is 20 minutes long and has been ongoing for the last year.

Michael Barbaro hosts the podcast that comes out weekday mornings and gives a unique perspective about one story that is in the news.