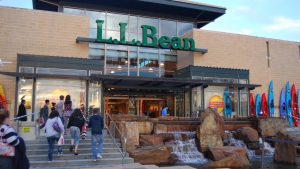 LL Bean raised its minimum age for purchasing a firearm, and that trend has started to sweep the industry. Retailers across the country are implementing new policies related to firearm sales.

This week, LL Bean said that after it had reviewed its firearm sales policy, it would not be selling firearms or ammunition to anyone less than 21 years of age.

The company’s flagship store located in Freeport, Maine is the only store it has that is licensed to sell guns. However, the new policy by LL Bean is evidence that change has taken with customers’ expectations of those retailers that have guns for sale.

Earlier this week, two weeks after the deadly shooting at a Parkland, Florida high school that killed 17 people, Dick’s Sporting Goods released a statement saying that shoppers under the age of 21 could not purchase firearms.

Walmart released a similar statement this week saying it was restricting customers less than 21 years of age from purchasing guns. Kroger said on Thursday it would increase its minimum age to purchase firearms from 18 to 21.

Federal law allows people 18 and older to purchases shotguns and rifles and those 21 years of age or older can purchases handguns from a licensed dealer, while states are able to make more restrictions.

Beyond moving the age to purchase firearms, Dicks and Kroger announced they would not sell any assault-style weapons any longer. That includes those similar to the one used in the shooting two weeks ago in Parkland.

The current wave of changes in policy is touching businesses that do not have guns for sale.

Late this week, REI the outdoor retailer announced it is no longer ordering brands that Vista Outdoor owns, including CamelBak, Bell and Giro, citing the silence by Vista Outdoor about plans for its brands of firearms like Savage Arms, which sell what it describes as modern sporting rifles.

U.S President Donald Trump expressed support when it came to increasing the purchase age for firearms from 18 to 21, as a way to lower fund violence as well as deaths in the country.

Trump said that this type of age policy is not supported by the National Rifle Association, saying the lobby group opposed it and that he was a NRA fan, adding that many great patriots love the country but that does not mean all of them must agree on everything.