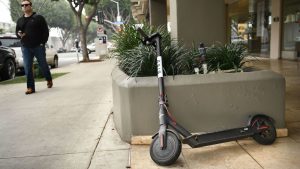 Bird has confirmed that Valor Ventures and Index Ventures led a new round of funding that raised $100 million for Bird, making the startup the Uber of the electric scooters world.

The company has been given a $300 million valuation said several people close to the company. Bird, which is a phenomenon around neighborhoods throughout Los Angeles, shares a great deal with Uber, the most valuable ride-hailing company in the world.

The company’s founder is Travis VanderZanden a former executive with both Uber and Lyft. He is not a stranger to controversy. He was sued by Lyft for allegedly breaking an agreement of confidentiality when he was hired by Uber and the two parties settled at a later date for terms that remain undisclosed.

Like Uber, the scooter company has rolled out services without much regard for the regulations that neighborhoods have imposed in the areas in which it has operations.

Just a few weeks ago, it was estimated that of the 1,000 electric scooters on the streets of LA, there have been 50,000 people take 250,000 rides, and many disregarding the laws that Santa Monica has in place.

One article in the Washington Post noted that the police department in Santa Monica made 281 traffic stops that resulted in 97 tickets since the start of 2018 and there have been eight accidents that involved scooters from Bird with injuries to both children and adults.

California law says that riders of motorized scooters need to be 16 years old or older, licensed drivers, wear a helmet and not ride on sidewalks, but those are things Bird does not have any control over.

Bird is now holding talks with the director of transportation for Santa Monica over a way it will work to incorporate the scooters into the regulatory framework of the city, while at the same time being sued by the city for ignoring existing regulations that the city argues should govern the ability operate.

In addition, a nuisance factor exists for businesses as Bird picks all scooters up prior to 8:00 PM so they are not on the streets but only offers the scooters in front of business that agreed to be a host.

Related to injuries, Bird pays if the scooter breaks, but not if one of the scooters’ riders is not riding in a correct normal fashion.