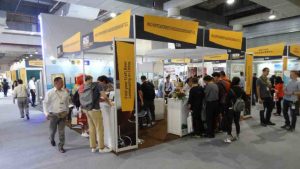 Little General, Panda Beer, Mandarin Wheat and Flying Fist IPA are amongst the craft beer on tap being offered during a beer exhibition in Shanghai this week that has the goal of expanding the drinking palette of consumers in China and promoting sales for high-end craft beers.

The exhibition features breweries such as Myth Monkey Brewing, Goose Island, Lazy Taps, Boxing Cat Brewery and Rasenburg Beer that are sharing their experience and tips on the most recent technology and trends in sales as consumers in China shift from the once popular legacy brews to the more refined, experimental and expensive flavors.

Creative mixes flowed from expo taps containing traditions and flavors, a cocktail of ingredients from China, barley, spices and hopes from across the globe.

There is money that can be made across China, which consumes 25% of all beer globally, and breweries specializing in small batch as well as huge multinational ones are cashing in.

Craft beer to date is not close to upstaging the giants of local beer such as Tsingtao that dominates the national beer market that is over $28 billion in size, but popularity in small breweries that are opening in large metropolitan areas of China such as Shenzhen, Shanghai and Beijing are making it more and more commonplace.

Craft beers typically cost more than do the mass-market lower count alcohol content beers such as Yanjing from China or Budweiser. However, as the middle class in China grows, so does its tastes for the finer products in the industry.

The Chinese spent more money on beer in 2017 than was spent in the U.S. Craft breweries were on a rapidly increasing mode although foreign imports are continuing to dominate the country’s high end beer sales.

The Belgian-Brazilian company Anheuser-Busch InBev, which makes Budweiser, has made large investments in China, building its own breweries and acquiring smaller craft breweries such as Boxing Cat in Shanghai. Anheuser Busch is also the owner of Goose Island in Chicago.