Complete the form below to receive the latest headlines and analysts' recommendations for York Water with our free daily email newsletter:

Creative Planning lowered its stake in shares of York Water Co (NASDAQ:YORW) by 13.8% during the third quarter, according to its most recent Form 13F filing with the SEC. The fund owned 21,650 shares of the utilities provider’s stock after selling 3,476 shares during the period. Creative Planning owned 0.17% of York Water worth $945,000 at the end of the most recent quarter.

York Water (NASDAQ:YORW) last announced its quarterly earnings results on Thursday, November 7th. The utilities provider reported $0.35 EPS for the quarter, beating the Thomson Reuters’ consensus estimate of $0.32 by $0.03. York Water had a return on equity of 11.06% and a net margin of 28.21%. The business had revenue of $13.68 million for the quarter, compared to analyst estimates of $13.00 million. As a group, equities analysts expect that York Water Co will post 1.13 earnings per share for the current year.

The firm also recently declared a quarterly dividend, which was paid on Tuesday, October 15th. Stockholders of record on Monday, September 30th were paid a $0.173 dividend. This represents a $0.69 annualized dividend and a dividend yield of 1.67%. The ex-dividend date of this dividend was Friday, September 27th. York Water’s dividend payout ratio (DPR) is presently 66.35%.

The York Water Company impounds, purifies, and distributes drinking water. It also owns and operates three wastewater collection systems and two wastewater treatment systems; and two reservoirs, including Lake Williams and Lake Redman, which hold approximately 2.2 billion gallons of water. In addition, the company has a 15-mile pipeline from the Susquehanna River to Lake Redman; and owns seven wells that supply water to its customers in Carroll Valley Borough and Cumberland Township, Adams County.

Featured Article: Should You Consider an Index Fund? 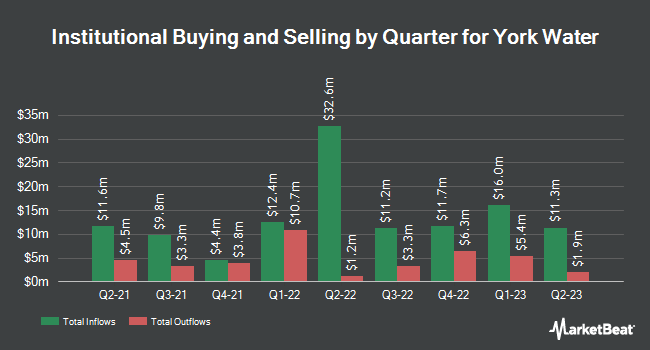