Complete the form below to receive the latest headlines and analysts' recommendations for Henry Schein with our free daily email newsletter:

Henry Schein (NASDAQ:HSIC) had its target price raised by research analysts at Bank of America from $69.00 to $71.00 in a research note issued on Tuesday, BenzingaRatingsTable reports. The brokerage currently has a “neutral” rating on the stock. Bank of America‘s target price indicates a potential upside of 3.66% from the company’s previous close.

Henry Schein (NASDAQ:HSIC) last announced its quarterly earnings data on Tuesday, November 5th. The company reported $0.90 earnings per share for the quarter, beating analysts’ consensus estimates of $0.86 by $0.04. The business had revenue of $2.51 billion during the quarter, compared to the consensus estimate of $2.52 billion. Henry Schein had a net margin of 4.66% and a return on equity of 15.93%. The company’s revenue for the quarter was up 6.5% compared to the same quarter last year. During the same quarter in the prior year, the firm earned $1.03 EPS. As a group, sell-side analysts predict that Henry Schein will post 3.45 earnings per share for the current year.

See Also: What sectors are represented in the FTSE 100 index? 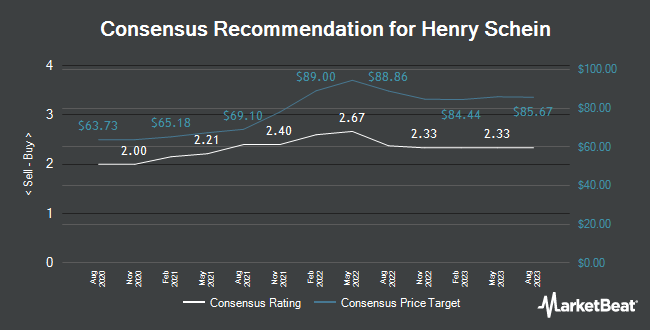