Complete the form below to receive the latest headlines and analysts' recommendations for Safe Bulkers with our free daily email newsletter:

Brokerages expect that Safe Bulkers, Inc. (NYSE:SB) will report $51.32 million in sales for the current fiscal quarter, according to Zacks. Two analysts have issued estimates for Safe Bulkers’ earnings, with the highest sales estimate coming in at $52.12 million and the lowest estimate coming in at $50.52 million. Safe Bulkers posted sales of $52.57 million during the same quarter last year, which suggests a negative year-over-year growth rate of 2.4%. The firm is expected to report its next quarterly earnings report on Tuesday, February 18th.

According to Zacks, analysts expect that Safe Bulkers will report full-year sales of $185.52 million for the current year, with estimates ranging from $184.65 million to $186.38 million. For the next financial year, analysts forecast that the company will report sales of $230.63 million, with estimates ranging from $229.70 million to $231.55 million. Zacks Investment Research’s sales averages are a mean average based on a survey of research analysts that follow Safe Bulkers.

Safe Bulkers (NYSE:SB) last announced its quarterly earnings data on Thursday, October 24th. The shipping company reported $0.03 EPS for the quarter, missing the Zacks’ consensus estimate of $0.05 by ($0.02). Safe Bulkers had a return on equity of 4.92% and a net margin of 11.05%. The firm had revenue of $47.13 million during the quarter, compared to analyst estimates of $48.67 million.

Safe Bulkers, Inc provides marine drybulk transportation services worldwide. It owns and operates drybulk vessels for transporting bulk cargoes primarily coal, grain, and iron ore. As of February 14, 2019, the company had a fleet of 41 drybulk vessels having an average age of 8.5 years; and an aggregate carrying capacity of 3.8 million deadweight tons. 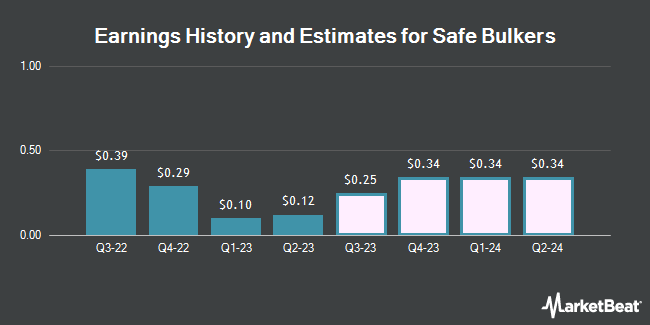 Bonpay Trading Up 3.5% This Week

ELTCOIN Trading Down 6.1% Over Last 7 Days