Complete the form below to receive the latest headlines and analysts' recommendations for Cerecor with our free daily email newsletter:

Cerecor Inc (NASDAQ:CERC) insider James Archie Harrell, Jr. acquired 3,064 shares of the stock in a transaction that occurred on Tuesday, December 10th. The stock was acquired at an average price of $4.18 per share, for a total transaction of $12,807.52.

Cerecor (NASDAQ:CERC) last released its quarterly earnings results on Thursday, November 14th. The company reported ($0.07) earnings per share for the quarter, beating the Zacks’ consensus estimate of ($0.13) by $0.06. Cerecor had a negative return on equity of 121.32% and a negative net margin of 113.66%. The business had revenue of $5.61 million for the quarter, compared to the consensus estimate of $5.15 million. Research analysts predict that Cerecor Inc will post -0.4 EPS for the current year.

Cerecor Inc, a pharmaceutical company, focuses on pediatric health care. Its lead product portfolio includes prescribed dietary supplements, such as Poly-Vi-Flor and Tri-Vi-Flor; and prescription drugs, such as Millipre, Ulesfia, Karbinal ER, AcipHex Sprinkle, and Cefaclor for oral suspension, as well as Flexichamber a medical device.

Recommended Story: What is a price target? 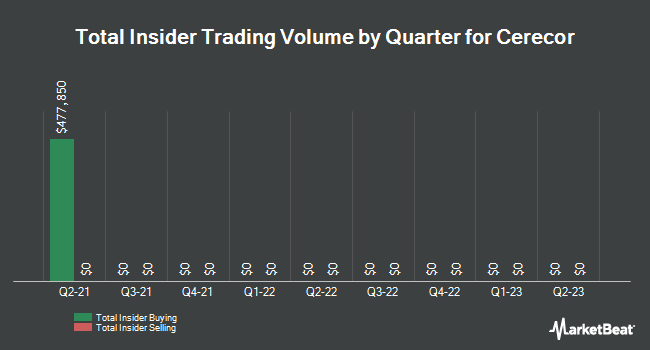 Receive News & Ratings for Cerecor Daily - Enter your email address below to receive a concise daily summary of the latest news and analysts' ratings for Cerecor and related companies with MarketBeat.com's FREE daily email newsletter.