Complete the form below to receive the latest headlines and analysts' recommendations for eBay with our free daily email newsletter:

eBay Inc (NASDAQ:EBAY) has been assigned a consensus rating of “Hold” from the thirty research firms that are covering the company, Marketbeat Ratings reports. Four research analysts have rated the stock with a sell recommendation, fifteen have assigned a hold recommendation and eight have given a buy recommendation to the company. The average 12-month price target among analysts that have issued a report on the stock in the last year is $42.54.

In other eBay news, SVP Wendy Elizabeth Jones sold 7,878 shares of the firm’s stock in a transaction on Tuesday, November 26th. The stock was sold at an average price of $35.73, for a total value of $281,480.94. Following the completion of the sale, the senior vice president now owns 39,000 shares of the company’s stock, valued at $1,393,470. The transaction was disclosed in a filing with the SEC, which is available through this hyperlink. 5.60% of the stock is currently owned by company insiders.

eBay (NASDAQ:EBAY) last issued its quarterly earnings results on Wednesday, October 23rd. The e-commerce company reported $0.67 earnings per share for the quarter, topping the Thomson Reuters’ consensus estimate of $0.64 by $0.03. eBay had a return on equity of 41.12% and a net margin of 18.33%. The firm had revenue of $2.65 billion during the quarter, compared to the consensus estimate of $2.65 billion. During the same period last year, the company earned $0.56 earnings per share. The company’s revenue for the quarter was up .0% on a year-over-year basis. Analysts anticipate that eBay will post 2.28 earnings per share for the current fiscal year.

The firm also recently announced a quarterly dividend, which was paid on Friday, December 20th. Shareholders of record on Monday, December 2nd were issued a $0.14 dividend. This represents a $0.56 dividend on an annualized basis and a yield of 1.58%. The ex-dividend date was Friday, November 29th. eBay’s dividend payout ratio (DPR) is currently 31.64%.

eBay Inc operates commerce platforms connecting various buyers and sellers worldwide. The company's Marketplace platforms include its online marketplace at ebay.com and the eBay suite of mobile apps; and StubHub platforms comprise its online ticket platform at stubhub.com, and the StubHub mobile apps that connect fans with their favorite sporting events, shows, and artists, as well as enables them to buy and sell tickets. 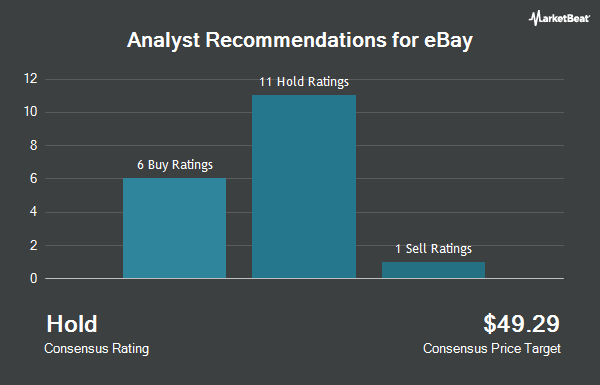 Receive News & Ratings for eBay Daily - Enter your email address below to receive a concise daily summary of the latest news and analysts' ratings for eBay and related companies with MarketBeat.com's FREE daily email newsletter.

Chromia Trading Down 10.6% Over Last Week