Complete the form below to receive the latest headlines and analysts' recommendations for Natera with our free daily email newsletter:

Natera (NASDAQ:NTRA) was downgraded by equities research analysts at BidaskClub from a “buy” rating to a “hold” rating in a research note issued on Tuesday, BidAskClub reports.

Natera (NASDAQ:NTRA) last announced its quarterly earnings data on Wednesday, November 6th. The medical research company reported ($0.33) EPS for the quarter, beating the consensus estimate of ($0.53) by $0.20. Natera had a negative net margin of 42.45% and a negative return on equity of 252.79%. The business had revenue of $77.90 million during the quarter, compared to the consensus estimate of $73.97 million. During the same period in the previous year, the business earned ($0.49) earnings per share. The company’s revenue was up 19.3% on a year-over-year basis. On average, equities research analysts predict that Natera will post -2.15 earnings per share for the current year.

Natera, Inc, a diagnostics company, provides preconception and prenatal genetic testing services. It primarily offers Panorama, a non-invasive prenatal test that screens for chromosomal abnormalities of a fetus with a blood draw from the mother; Vistara, a single-gene mutations screening test to identify single-gene disorder; Horizon carrier screening to determine carrier status for various genetic diseases that could be passed on to the carrier's children; and Spectrum pre-implantation genetic screening and Spectrum pre-implantation genetic diagnosis to analyze chromosomal anomalies or inherited genetic conditions during an in vitro fertilization cycle. 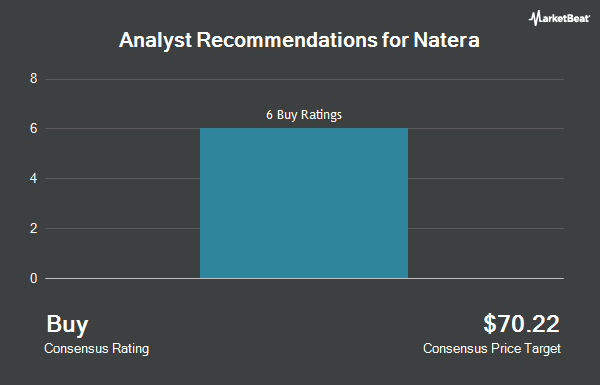 Receive News & Ratings for Natera Daily - Enter your email address below to receive a concise daily summary of the latest news and analysts' ratings for Natera and related companies with MarketBeat.com's FREE daily email newsletter.

Omnicell Upgraded to Buy by BidaskClub