Complete the form below to receive the latest headlines and analysts' recommendations for FTS International with our free daily email newsletter:

Equities analysts expect FTS International Inc (NYSE:FTSI) to post $135.87 million in sales for the current fiscal quarter, Zacks reports. Three analysts have issued estimates for FTS International’s earnings, with the highest sales estimate coming in at $145.00 million and the lowest estimate coming in at $127.00 million. FTS International posted sales of $248.10 million in the same quarter last year, which would indicate a negative year-over-year growth rate of 45.2%. The firm is scheduled to issue its next earnings report on Wednesday, February 26th.

On average, analysts expect that FTS International will report full year sales of $767.12 million for the current year, with estimates ranging from $758.07 million to $779.00 million. For the next financial year, analysts anticipate that the company will post sales of $633.03 million, with estimates ranging from $569.00 million to $670.80 million. Zacks Investment Research’s sales averages are a mean average based on a survey of research firms that that provide coverage for FTS International.

FTS International (NYSE:FTSI) last issued its quarterly earnings data on Monday, November 4th. The company reported ($0.05) earnings per share for the quarter, missing analysts’ consensus estimates of $0.01 by ($0.06). FTS International had a negative net margin of 3.79% and a positive return on equity of 49.11%. The company had revenue of $186.00 million for the quarter, compared to the consensus estimate of $208.10 million. 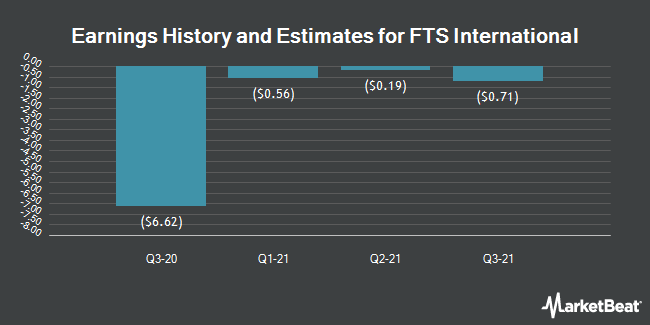