Complete the form below to receive the latest headlines and analysts' recommendations for TechnipFMC with our free daily email newsletter:

TechnipFMC (NYSE:FTI) last announced its quarterly earnings results on Wednesday, October 23rd. The oil and gas company reported $0.12 earnings per share (EPS) for the quarter, missing analysts’ consensus estimates of $0.50 by ($0.38). TechnipFMC had a positive return on equity of 2.11% and a negative net margin of 16.30%. The firm had revenue of $3.34 billion during the quarter, compared to analysts’ expectations of $3.54 billion. During the same period in the previous year, the company posted $1.09 earnings per share. The company’s quarterly revenue was up 6.1% compared to the same quarter last year. On average, equities analysts anticipate that TechnipFMC will post 1.17 EPS for the current fiscal year.

In other TechnipFMC news, CFO Maryann T. Mannen sold 14,500 shares of TechnipFMC stock in a transaction that occurred on Monday, December 23rd. The shares were sold at an average price of $20.84, for a total transaction of $302,180.00. The transaction was disclosed in a filing with the SEC, which can be accessed through the SEC website. Also, Director Olivier Piou purchased 3,000 shares of the firm’s stock in a transaction on Friday, November 22nd. The shares were acquired at an average cost of $19.49 per share, for a total transaction of $58,470.00. Following the completion of the purchase, the director now directly owns 3,000 shares of the company’s stock, valued at approximately $58,470. The disclosure for this purchase can be found here. Company insiders own 0.50% of the company’s stock.

TechnipFMC plc engages in the oil and gas projects, technologies, and systems and services businesses. It operates through three segments: Subsea, Onshore/Offshore, and Surface Technologies. The Subsea segment manufactures and designs products and systems; performs engineering, procurement, and project management; and provides services used by oil and gas companies involved in deepwater exploration and production of crude oil and natural gas.

Featured Article: What is the price-sales ratio? 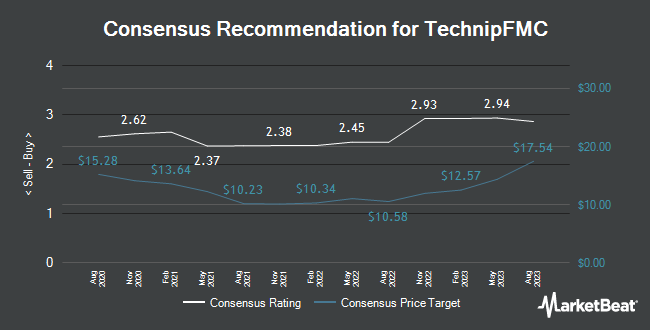