Complete the form below to receive the latest headlines and analysts' recommendations for EOG Resources with our free daily email newsletter:

State Street Corp grew its position in shares of EOG Resources Inc (NYSE:EOG) by 3.7% in the 4th quarter, according to the company in its most recent Form 13F filing with the SEC. The firm owned 28,201,688 shares of the energy exploration company’s stock after acquiring an additional 1,006,145 shares during the quarter. State Street Corp owned about 4.85% of EOG Resources worth $2,362,173,000 as of its most recent filing with the SEC.

In other news, Director Charles R. Crisp sold 420 shares of the company’s stock in a transaction dated Friday, January 10th. The stock was sold at an average price of $86.49, for a total value of $36,325.80. Following the transaction, the director now owns 50,296 shares in the company, valued at approximately $4,350,101.04. The sale was disclosed in a filing with the Securities & Exchange Commission, which is available through the SEC website. 0.20% of the stock is owned by corporate insiders.

EOG Resources, Inc, together with its subsidiaries, explores for, develops, produces, and markets crude oil and natural gas. The company's principal producing areas are located in New Mexico, North Dakota, Texas, Utah, and Wyoming in the United States; and the Republic of Trinidad and Tobago, the People's Republic of China, and Canada.

Featured Story: What is the significance of the death cross? 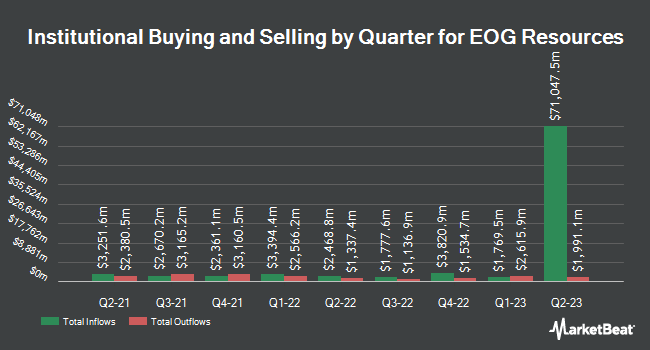