Complete the form below to receive the latest headlines and analysts' recommendations for Lululemon Athletica with our free daily email newsletter:

Lululemon Athletica inc. (NASDAQ:LULU) – Analysts at Wedbush increased their Q3 2021 earnings per share estimates for Lululemon Athletica in a report issued on Wednesday, September 2nd. Wedbush analyst J. Redding now forecasts that the apparel retailer will post earnings of $1.09 per share for the quarter, up from their previous estimate of $1.03. Wedbush has a “Neutral” rating and a $380.00 price target on the stock.

Lululemon Athletica (NASDAQ:LULU) last released its quarterly earnings results on Thursday, June 11th. The apparel retailer reported $0.22 earnings per share for the quarter, missing the Thomson Reuters’ consensus estimate of $0.23 by ($0.01). The company had revenue of $651.96 million during the quarter, compared to the consensus estimate of $695.98 million. Lululemon Athletica had a net margin of 15.01% and a return on equity of 33.27%. The firm’s revenue was down 16.7% compared to the same quarter last year. During the same period in the prior year, the company earned $0.74 earnings per share.

lululemon athletica inc., together with its subsidiaries, designs, distributes, and retails athletic apparel and accessories for women, men, and female youth. It operates through two segments, Company-Operated Stores and Direct to Consumer. The company offers pants, shorts, tops, and jackets for healthy lifestyle and athletic activities, such as yoga, running, and training, as well as other sweaty pursuits; and athletic wear for female youth.

Recommended Story: How does a dividend reinvestment plan work? 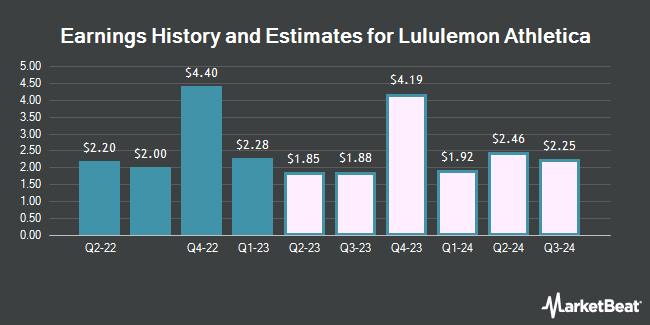 Teachers Retirement System of The State of Kentucky Has $2.16 Million Stake in State Street Corp

Teachers Retirement System of The State of Kentucky Reduces Position in Cintas Co.