Complete the form below to receive the latest headlines and analysts' recommendations for Apollo Medical with our free daily email newsletter:

Apollo Medical Holdings Inc (NASDAQ:AMEH) insider Brandon Sim bought 1,000 shares of Apollo Medical stock in a transaction dated Monday, September 14th. The stock was acquired at an average cost of $17.20 per share, for a total transaction of $17,200.00. Following the purchase, the insider now directly owns 17,379 shares in the company, valued at approximately $298,918.80. The transaction was disclosed in a document filed with the Securities & Exchange Commission, which is available through this hyperlink.

Apollo Medical (NASDAQ:AMEH) last announced its earnings results on Friday, August 7th. The company reported $0.19 EPS for the quarter, topping the consensus estimate of $0.07 by $0.12. The firm had revenue of $165.17 million for the quarter. Apollo Medical had a net margin of 3.24% and a return on equity of 11.69%. On average, equities research analysts predict that Apollo Medical Holdings Inc will post 0.78 EPS for the current fiscal year. 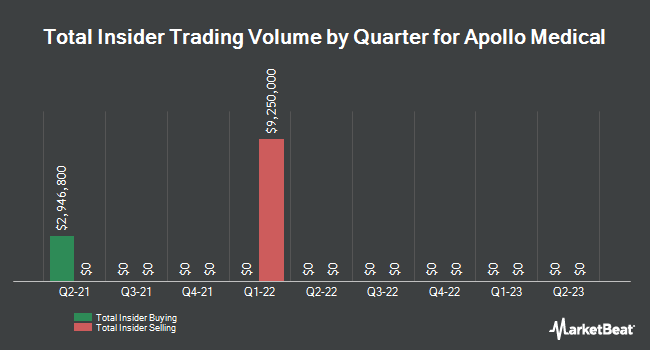