Complete the form below to receive the latest headlines and analysts' recommendations for Carvana with our free daily email newsletter:

Carvana Co. (NYSE:CVNA) COO Benjamin E. Huston sold 6,300 shares of Carvana stock in a transaction dated Monday, November 30th. The stock was sold at an average price of $249.95, for a total value of $1,574,685.00. Following the completion of the transaction, the chief operating officer now owns 37,742 shares of the company’s stock, valued at $9,433,612.90. The transaction was disclosed in a document filed with the Securities & Exchange Commission, which is accessible through this link.

Carvana (NYSE:CVNA) last issued its quarterly earnings results on Thursday, October 29th. The company reported ($0.10) EPS for the quarter, topping the consensus estimate of ($0.29) by $0.19. Carvana had a negative net margin of 3.06% and a negative return on equity of 43.19%. The firm had revenue of $1.54 billion for the quarter, compared to analysts’ expectations of $1.53 billion. During the same period in the previous year, the business earned ($0.56) earnings per share. Carvana’s revenue for the quarter was up 41.0% compared to the same quarter last year. On average, equities analysts predict that Carvana Co. will post -2.38 EPS for the current fiscal year.

Carvana Co, together with its subsidiaries, operates an e-commerce platform for buying and selling used cars in the United States. Its platform allows customers to research and identify a vehicle; inspect it using company's 360-degree vehicle imaging technology; obtain financing and warranty coverage; purchase the vehicle; and schedule delivery or pick-up from their desktop or mobile devices.

Read More: Stock Market – What is a circuit breaker? 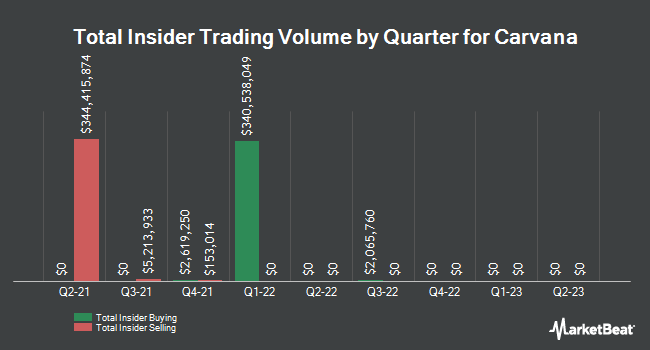 Receive News & Ratings for Carvana Daily - Enter your email address below to receive a concise daily summary of the latest news and analysts' ratings for Carvana and related companies with MarketBeat.com's FREE daily email newsletter.