Complete the form below to receive the latest headlines and analysts' recommendations for First Bank with our free daily email newsletter:

Equities research analysts expect First Bank (NASDAQ:FRBA) to post sales of $19.75 million for the current fiscal quarter, according to Zacks Investment Research. Two analysts have made estimates for First Bank’s earnings, with the highest sales estimate coming in at $19.80 million and the lowest estimate coming in at $19.70 million. First Bank posted sales of $17.68 million in the same quarter last year, which would indicate a positive year over year growth rate of 11.7%. The company is scheduled to announce its next earnings results before the market opens on Thursday, January 28th.

First Bank (NASDAQ:FRBA) last announced its quarterly earnings data on Saturday, October 31st. The bank reported $0.30 EPS for the quarter, beating the Thomson Reuters’ consensus estimate of $0.22 by $0.08. First Bank had a return on equity of 8.29% and a net margin of 19.27%. The company had revenue of $19.88 million for the quarter, compared to the consensus estimate of $18.60 million.

Several research firms have issued reports on FRBA. TheStreet raised shares of First Bank from a “c” rating to a “b-” rating in a research report on Tuesday, November 10th. DA Davidson reiterated a “buy” rating on shares of First Bank in a report on Monday, September 14th. Finally, Zacks Investment Research raised First Bank from a “hold” rating to a “strong-buy” rating and set a $9.00 price objective on the stock in a research note on Friday, October 30th. One equities research analyst has rated the stock with a sell rating, two have assigned a buy rating and one has given a strong buy rating to the stock. First Bank currently has a consensus rating of “Buy” and a consensus price target of $10.00.

Featured Story: What is the balance sheet? 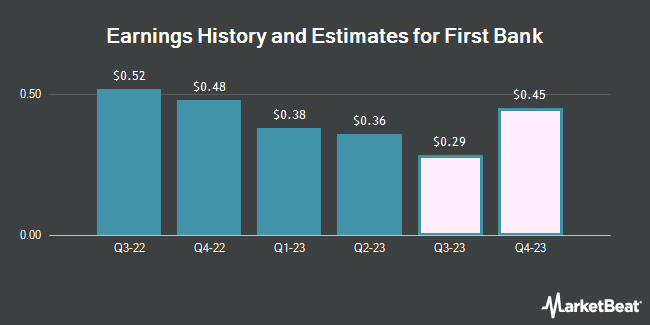