Complete the form below to receive the latest headlines and analysts' recommendations for Medpace with our free daily email newsletter:

Medpace Holdings, Inc. (NASDAQ:MEDP) CEO August J. Troendle sold 19,930 shares of the stock in a transaction that occurred on Wednesday, December 30th. The stock was sold at an average price of $140.01, for a total value of $2,790,399.30. Following the completion of the transaction, the chief executive officer now directly owns 706,643 shares in the company, valued at approximately $98,937,086.43. The sale was disclosed in a filing with the Securities & Exchange Commission, which can be accessed through this link.

Medpace (NASDAQ:MEDP) last released its earnings results on Saturday, October 31st. The company reported $1.09 earnings per share (EPS) for the quarter, beating the consensus estimate of $1.07 by $0.02. The firm had revenue of $230.37 million for the quarter, compared to the consensus estimate of $223.56 million. Medpace had a return on equity of 17.67% and a net margin of 13.87%. The firm’s revenue was up 6.5% on a year-over-year basis. During the same period in the prior year, the firm earned $0.71 EPS. As a group, sell-side analysts predict that Medpace Holdings, Inc. will post 4 earnings per share for the current year. 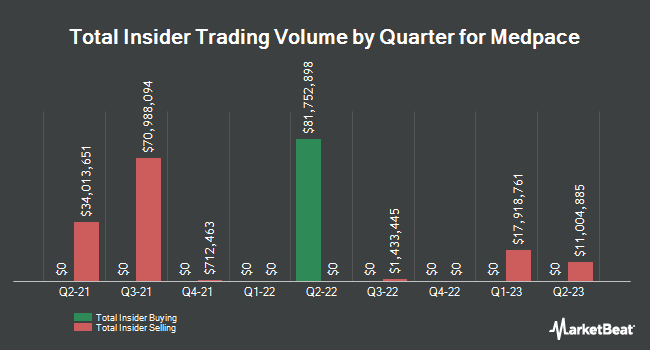 Receive News & Ratings for Medpace Daily - Enter your email address below to receive a concise daily summary of the latest news and analysts' ratings for Medpace and related companies with MarketBeat.com's FREE daily email newsletter.